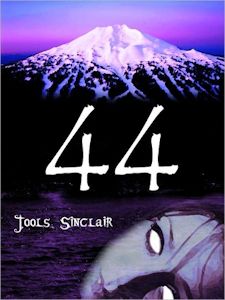 Last year after falling through the ice, seventeen-year-old Abby Craig woke up from death - but she woke into a world she barely recognizes. She can't see colors, memories have been erased, and her friends all hate her. And then there's Jesse, who she loves, but who refuses to forgive her the one mistake she made long ago.

Just when she thinks it can't get any worse, the visions begin. In them, she sees a faceless serial killer roaming the streets. While the police believe that there have been a lot of accidents in town lately, Abby knows differently. And she soon realizes that it's up to her to find him. But to stop him, she'll have to confront more than just the killer. She'll have to face something else that was lost in those dark waters: the truth.

44 was just about impossible to put down once I started.  From the very beginning, there was an air of mystery that kept me on the edge of my seat.  There was always a bit of the story that was just beyond my reach, a piece missing that was integral to Abby’s story.  Instead of that missing piece being frustrating, it was what kept me thoroughly engrossed to the end of the book.

Abby was a fantastic lead character, amazingly real and fully relatable.  She was struggling to find herself after her accident, and while the circumstances were different, her struggles were similar to those we all go through in life.  I felt her pain, her frustration, her fears, as if they were my own.  Jesse, too, was a great character, and perfectly developed for his role in this story.

Everything in this story worked so well together.  The plot of the story and the characters are perfectly balanced, with the suspense woven throughout the story but never overwhelming any of the subplots.  When that “ephiphany” moment came, I totally wasn’t expecting it and I made an audible noise that caught the attention of everyone around me. I love a suspenseful story that totally throws me and keeps me guessing.  I highly recommend this fantastic novel!

Jools Sinclair lives in Bend, Oregon. She is an avid reader, movie watcher, orange cat lover, Frye boot wearer and Komodo Dragon coffee drinker. She admits to having an intense passion for opera and loves faraway lands where espresso bars and pastry shops line the streets. Finally, she is absolutely crazy about her family, who in turn thinks she is absolutely crazy.