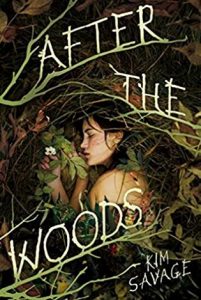 Would you risk your life to save your best friend?
Julia did. When a paroled predator attacked Liv in the woods, Julia fought back and got caught. Liv ran, leaving Julia in the woods for a terrifying 48 hours that she remembers only in flashbacks. One year later, Liv seems bent on self-destruction, starving herself, doing drugs, and hooking up with a violent new boyfriend. A dead girl turns up in those same woods, and Julia’s memories resurface alongside clues unearthed by an ambitious reporter that link the girl to Julia’s abductor. As the devastating truth becomes clear, Julia realizes that after the woods was just the beginning.

KIM SAVAGE is the author of three critically acclaimed young adult novels, After the Woods (Kirkus, Booklist starred), Beautiful Broken Girls (Kirkus star, Kirkus 10 Best YA of 2017), and In Her Skin (YALSA Best YA 2019), all with Farrar, Straus, Giroux/Macmillan. Her novels have been published in Spain, Brazil, and Turkey, and have been optioned for TV. Kim presents at conferences and book festivals nationwide; has been featured on NPR, Herald Radio, and on local cable stations; and she reads from her novels at bookstores across the country. A former reporter with a Master degree in Journalism from Northeastern University, Kim’s stories are based in and around Boston. She lives with her family near Boston, not far from the real Middlesex Fells Reservation of After the Woods. Kim and her husband have three children, each of whom beg to appear in her books. They shouldn’t.