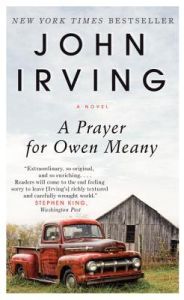 In the summer of 1953, two eleven-year-old boys—best friends—are playing in a Little League baseball game in Gravesend, New Hampshire. One of the boys hits a foul ball that kills the other boy's mother. The boy who hits the ball doesn't believe in accidents; Owen Meany believes he is God's instrument. What happens to Owen after that 1953 foul ball is extraordinary.

This is one of the mot powerful opening sentences I have ever read in a novel, and it sets the tone for the rest of the novel.  I read this book at the behest of two high school friends, Laurie and Ginny.  We three live in different parts of the country, have lived very different lives, and likely come at the themes of A Prayer for Owen Meary from very different perspectives.  I mention this only because I feel that this novel is rich with important themes and one’s life experiences and personal beliefs play a significant role in the interpretation of those themes.

The story is narrated by John Wheelwright from the perspective of his middle-aged self, telling the stories of his youth in Gravesend, New Hampshire and interspersing them with commentary on his present.  His stories center on his best friend, the title character Owen Meary.  John comes from an old, well-established family, while Owen comes from a working class family in the granite industry… an industry that John’s aristocratic grandmother deems to be “dirty.”

John, while from a privliged family, has never known his father.  His mother referred to John as the product of a “little fling,” refusing to disclose the identity of his father to him, or to her mother and sister.  Despite the scandal of having a child out of wedlock at that time, she held her head high and was never ashamed.  She loved her child and she loved to sing, and she did them both without shame.  But then a freak accident takes his mother, an accident that changes Owen, too.  It is that accident that causes John to begin to wonder about his father.  Owen encourages his quest, insisting that God will show him the answers he seeks.

Owen is a bit of a misfit, small for his age and brilliant and wise beyond his years.  There is something about him that commands attention, from his peers and adults alike.  He is strong in his faith and feels that he is God’s hand on earth.  His dialogue is present in all caps, further underlining the idea that Owen is somehow more than human, somehow divine.  He constantly reminds John, as he falters in his faith, that faith takes practice and that sometimes he just has to accept that.

The religious themes are prevalent throughout the novel and, at first, this was a bit off-putting for me.  I tend to stay away from strongly religiously-themed novel, generally finding them to be more “preachy” than I enjoy.  I think your own personal experience/relationship with religion really plays into those themes. I was raised Episcopalian, but I pretty much have eschewed orgainized religion, being more spiritual than religious. So I probably had different feelings and ideas about those themes than others who embrace their faith more readily. But the pressure on Owen to live up to his parents’ (and his own) assertations about his destiny is something that I think anyone can have empathy for.

And there is no question that the Army girl still in me had some conflicted feelings about the military/war themes. I had a hard time really feeling for the narrator, outside of his love for Owen.  There was a purposeful lack of clairty for most of the book about the motivations behind some of his adult choices, vague due to the story arc, and it led me to believe that John was something/someone other than who he turned out to be.  My assumptions, which I think were perhaps intended by the author, led me to dislike the adult version of his character due to my own military experiences.  Some of his ideas presented by his adult self, while I understood the reasons behind them, sometimes rubbed me the wrong way. There was also a moment in which Owen decides to dramatically help John try to avoid the draft that also conflicted me.  It was a drastic moment, one that was done out of love, but it was the acceptance of Owen’s dubious gift by John that bothered me, once again because of my own military experiences.  But, then again, the subjects of war and politics are often those of controversy, aren’t they?!

This is a thinking book, not a light read.  There are strong themes in this novel, themes that make you question your own thoughts, beliefs, and faith.  Yet there are also moments that are suprisingly funny.  The author has a witty way with words that give a tongue-in-cheek humor to a lot of situations and it is something that I truly appreciated.  I think that this is a book that will continue to reveal more of itself with subsequent readings.

John Irving published his first novel, Setting Free the Bears, in 1968. He has been nominated for a National Book Award three times-winning once, in 1980, for the novel The World According to Garp. He also received an O. Henry Award, in 1981, for the short story “Interior Space.” In 1992, Mr. Irving was inducted into the National Wrestling Hall of Fame in Stillwater, Oklahoma. In 2000, he won the Oscar for Best Adapted Screenplay for The Cider House Rules-a film with seven Academy Award nominations. In 2001, he was elected to the American Academy of Arts and Letters.

« A Clash of Kings
Gathering Frost »