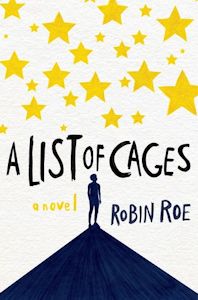 When Adam Blake lands the best elective ever in his senior year, serving as an aide to the school psychologist, he thinks he's got it made. Sure, it means a lot of sitting around, which isn't easy for a guy with ADHD, but he can't complain, since he gets to spend the period texting all his friends. Then the doctor asks him to track down the troubled freshman who keeps dodging her, and Adam discovers that the boy is Julian--the foster brother he hasn't seen in five years.

Adam is ecstatic to be reunited. At first, Julian seems like the boy he once knew. He's still kind hearted. He still writes stories and loves picture books meant for little kids. But as they spend more time together, Adam realizes that Julian is keeping secrets, like where he hides during the middle of the day, and what's really going on inside his house. Adam is determined to help him, but his involvement could cost both boys their lives. First-time novelist Robin Roe relied on life experience when writing this exquisite, gripping story featuring two lionhearted characters.

A List of Cages is beautifully written, telling the story of two boys whose lives have crossed once again.  Their lives have intersected at times of pain and sorrow, but it is their unlikely friendship that changes both of their lives.  This is a novel that will stick with you for a very long time, one that gives you all of the feels from the very first page.

It is a sad yet beautiful story that really resonated with me.  There were some moments as I read when I just felt like my heart would break.  The story told was often not a happy one, but it is a powerful one and one that is all too real for too many people.  Roe writes it with a brush of reality that makes the story that much more important and relevant.

What I enjoyed most with the depth of the story.  There was a variety of important issues woven into the story and those were presented with all of the rawness that is their reality.  The value of family and friends.  Dealing with ADHD.  The reality of the foster system.  The loss of family and loved ones.  Child abuse.  All of these things exist and I loved that the author didn’t shy away from addressing the darker aspects of reality.

This is a powerful and important read that I would recommend for everyone, young adults and adults alike.

Robin Roe is the author of A LIST OF CAGES, which has received starred reviews from Booklist, Kirkus, and Publishers Weekly. She has a bachelor’s degree from Cornell University and a master’s from Harvard. She counseled adolescents in Boston before she moved to Dallas to run a mentoring program for at-risk teens.

Robin loves connecting with her readers and can be found on Twitter @robinroewriter. You can also use the contact form on her website to send her a message: www.robinroewriter.com.

« Tuesday Memes
The Bookshop on the Corner »