The lives of the Barretts, a normal suburban New England family, are torn apart when fourteen-year-old Marjorie begins to display signs of acute schizophrenia.
To her parents' despair, the doctors are unable to stop Marjorie's descent into madness. As their stable home devolves into a house of horrors, they reluctantly turn to a local Catholic priest for help. Father Wanderly suggests an exorcism; he believes the vulnerable teenager is the victim of demonic possession. He also contacts a production company that is eager to document the Barretts' plight. With John, Marjorie's father, out of work for more than a year and the medical bills looming, the family agrees to be filmed, and soon find themselves the unwitting stars of The Possession, a hit reality television show. When events in the Barrett household explode in tragedy, the show and the shocking incidents it captures become the stuff of urban legend.
Fifteen years later, a bestselling writer interviews Marjorie's younger sister, Merry. As she recalls those long ago events that took place when she was just eight years old, long-buried secrets and painful memories that clash with what was broadcast on television begin to surface--and a mind-bending tale of psychological horror is unleashed, raising vexing questions about memory and reality, science and religion, and the very nature of evil.

A Head Full of Ghosts is The Exorcist meets Ghost Adventures, a modern take on a both possession and the world of reality TV. Majorie Barrett is only 14 when she begins acting bizarrely. None of her doctors are able to help her, and as the family begins to fall apart, they turn to the church. In an odd twist, it is the priest that not only suggests an exorcism but who involves a reality TV production.

Nothing about that could go wrong, right?

The power of A Head Full of Ghosts is found in its narrative. Most of the story is told through the perspective of Merry, some of it through a present narrative but the majority by a younger Merry. The other, less frequent narrative is that of a horror fan blogger named Karen. It’s a great style that helps bring the reader right into the story, and keeps them there.

The horror of this novel was not found in blood and gore. It was found in uncomfortable moments and in the atmosphere. There is an ever-present sense of foreboding, moments that are cringe-worthy. Such a great read!

If you love a book that gets into your head and makes you think, this is a great read!

Paul Tremblay has won the Bram Stoker, British Fantasy, and Massachusetts Book awards and is the author of The Cabin at the End of the World, Disappearance at Devil’s Rock, A Head Full of Ghosts, the crime novels The Little Sleep and No Sleep Till Wonderland, and the short story collection, Growing Things and Other Stories.

He is currently a member of the board of directors of the Shirley Jackson Awards, and his essays and short fiction have appeared in the Los Angeles Times, Entertainment Weekly online, and numerous year’s-best anthologies. He has a master’s degree in mathematics and lives outside Boston with his family. 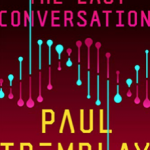