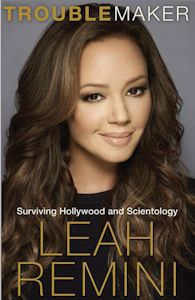 The outspoken actress, talk show host, and reality television star offers up a no-holds-barred memoir, including an eye-opening insider account of her tumultuous and heart-wrenching thirty-year-plus association with the Church of Scientology.

Leah Remini has never been the type to hold her tongue. That willingness to speak her mind, stand her ground, and rattle the occasional cage has enabled this tough-talking girl from Brooklyn to forge an enduring and successful career in Hollywood. But being a troublemaker has come at a cost.

That was never more evident than in 2013, when Remini loudly and publicly broke with the Church of Scientology. Now, in this frank, funny, poignant memoir, the former King of Queens star opens up about that experience for the first time, revealing the in-depth details of her painful split with the church and its controversial practices.

Indoctrinated into the church as a child while living with her mother and sister in New York, Remini eventually moved to Los Angeles, where her dreams of becoming an actress and advancing Scientology’s causes grew increasingly intertwined. As an adult, she found the success she’d worked so hard for, and with it a prominent place in the hierarchy of celebrity Scientologists alongside people such as Tom Cruise, Scientology’s most high-profile adherent. Remini spent time directly with Cruise and was included among the guests at his 2006 wedding to Katie Holmes.

But when she began to raise questions about some of the church’s actions, she found herself a target. In the end, she was declared by the church to be a threat to their organization and therefore a “Suppressive Person,” and as a result, all of her fellow parishioners—including members of her own family—were told to disconnect from her. Forever.

Bold, brash, and bravely confessional, Troublemaker chronicles Leah Remini’s remarkable journey toward emotional and spiritual freedom, both for herself and for her family. This is a memoir designed to reveal the hard-won truths of a life lived honestly—from an author unafraid of the consequences.

I started watching Leah Remini’s documentary on A&E about Scientology and have been fascinated with it.  I have a self-admitted fascination with how different faiths work, especially those of a more controversial nature.  It was what led me to the library to find this book.  And I haven’t been able to put it down since.

One of the things I most appreciate about this book is that Remini doesn’t try to portray herself as anyone other than who she is.  She doesn’t clean it up for a book.  She presents her story as if she were telling it to you over a cup of coffee, f-bombs and all.  And she presents it with truth and honesty, not only describing her issues with the church, but putting her faults and those of her loved ones with equal measure.  There are no holds barred and that really gave legitimacy to what she had to say.

The book is about her experience with Scientology and that with Hollywood.  For her, the two experiences have been largely entwined.  There really was no line separating Scientology from any other part of her life.  Her career, her family, her friends, even her marriage… all highly dictated and controlled by her church.  It is an eye-opening read.

No matter what your personal thoughts or beliefs, this is a fascinating read.  It is honest, deep, and sometimes very dark.  I highly recommend this book if you are looking for an intense personal story.

Leah Remini is an actor, producer, and #1 New York Times bestselling author. A fixture on television since the age of eighteen, Remini is best known for her beloved role of Carrie on the nine-season hit The King of Queens. Remini went on to produce and star in one of the earliest and most successful comedic web series, In the Motherhood, and appeared in the movie Old School alongside Will Ferrell and Vince Vaughn. In 2010, Remini helped launch and co-hosted the first season of the CBS daytime hit show The Talk, and in 2013 she was seen on the dance floor in Dancing with the Stars. She currently co-stars in the TV Land comedy The Exes and TLC’s reality show Leah Remini: It’s All Relative, which she also created and executive produces. Remini finds great joy in her philanthropic work with numerous and diverse military, women’s, and children’s charities. She lives in Los Angeles with her husband and daughter.