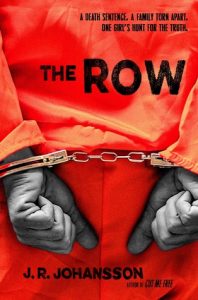 A death sentence. A family torn apart. One girl’s hunt for the truth.
Seventeen-year-old Riley Beckett is no stranger to prison. Her father is a convicted serial killer on death row who has always maintained that he was falsely accused. Riley has never missed a single visit with her father. She wholeheartedly believes that he is innocent.
Then, a month before the execution date, Riley’s world is rocked when, in an attempt to help her move on, her father secretly confesses to her that he actually did carry out the murders. He takes it back almost immediately, but she cannot forget what he’s told her. Determined to uncover the truth for her own sake, she discovers something that will forever change everything she’s believed about the family she loves.

J.R. JOHANSSON is the author of the Night Walkers Series (INSOMNIA, PARANOIA and MANIA) as well as standalone novels, CUT ME FREE, THE ROW and TO THE BONE. Her books have been published in over a dozen languages and more than twenty countries worldwide. She has a B.S. degree in public relations and a background in marketing. She credits her abnormal psychology minor with inspiring many of her characters. She lives in a valley by the mountains where the sun shines 300+ days per year with a hot tub named Valentino.