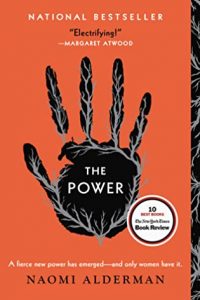 In THE POWER, the world is a recognizable place: there's a rich Nigerian boy who lounges around the family pool; a foster kid whose religious parents hide their true nature; an ambitious American politician; a tough London girl from a tricky family. But then a vital new force takes root and flourishes, causing their lives to converge with devastating effect. Teenage girls now have immense physical power--they can cause agonizing pain and even death. And, with this small twist of nature, the world drastically resets.

Naomi Alderman (born 1974 in London) is a British author and novelist.
Alderman was educated at South Hampstead High School and Lincoln College, Oxford where she read Philosophy, Politics and Economics. She then went on to study creative writing at the University of East Anglia before becoming a novelist.
She was the lead writer for Perplex City, an Alternate reality game, at Mind Candy from 2004 through June, 2007.
Her father is Geoffrey Alderman, an academic who has specialised in Anglo-Jewish history. She and her father were interviewed in The Sunday Times “Relative Values” feature on 11 February 2007.

Her literary debut came in 2006 with Disobedience, a well-received (if controversial) novel about a rabbi’s daughter from North London who becomes a lesbian, which won her the 2006 Orange Award for New Writers.
Since its publication in the United Kingdom, it has been issued in the USA, Germany, Israel, Holland, Poland and France and is due to be published in Italy, Hungary and Croatia.
She wrote the narrative for The Winter House, an online, interactive yet linear short story visualized by Jey Biddulph. The project was commissioned by Booktrust as part of the Story campaign, supported by Arts Council England.

« The Importance of Being Kennedy’s
Sadie »