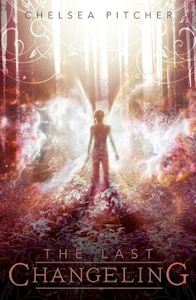 Elora, the young princess of the Dark Faeries, plans to overthrow her tyrannical mother, the Dark Queen, and bring equality to faeriekind. All she has to do is convince her mother’s loathed enemy, the Bright Queen, to join her cause. But the Bright Queen demands an offering first: a human boy who is a “young leader of men.”

To steal a mortal, Elora must become a mortal—at least, by all appearances. And infiltrating a high school is surprisingly easy. When Elora meets Taylor, the seventeen-year-old who’s plotting to overthrow a ruthless bully, she thinks she’s found her offering . . . until she starts to fall in love.

The Last Changeling is the first book in the new Faerie Revolutions series and I love the fact that it is so much more than a YA fantasy romance novel.  At its heart, it is a story about equality and standing up for what is right.  It is about fighting prejuice and making the hard choices in order to remain true to what you believe is right.

That being said, it is also not a book that really hits you over the head with those messages.  They may be the driving force behind the story, but they don’t overwhelm it.  There is also magic, romance, danger, friendship, and a whole lot of intrigue woven all around the true messages of the story.

The characters in this book are fantastic.  Elora, our main character, is fighting to change her world… the world of Faery.  She has been brought up in a world of racial prejudice, the light and the dark realms of Faery fighting against one another for centuries.  She has been brought up to believe that humans are yet another enemy, lesser creatures incapable of true compassion and love.  She has come to realize that those racial prejudices within her own world are weakening it for both sides and is trying to change that.  When she moves into the human world and is saved by Taylor (a human guy), she is faced with the realization that perhaps humanity is not what she thought it was.

The destructive prejudices that she has found to be true of the Faery realms are also present in Unity High School, the human school she has “infiltrated” with a name that does not fit its reality.  The prejudices here are manifested in sexuality and the treatment that those who are thought to be anything other than straight is horrendous.  Taylor and Elora team up to change that, along with some unexpected allies.

I really enjoyed the premise behind this story, unlike any others I have read.  I am a sucker for all things faery and I loved that this one came from the perspective of a Dark Faery.  The story was engaging and engrossing and I can’t wait to read the next installment!

Chelsea Pitcher is a native of Portland, OR where she received her BA in English Literature. Fascinated by all things literary, she began gobbling up stories as soon as she could read, and especially enjoys delving into the darker places to see if she can draw out some light.

« The Revealed
One Wish Away »