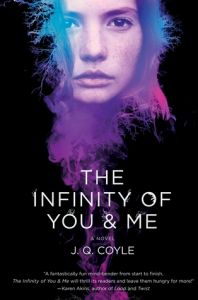 What if every life-altering choice you made could split your world into infinite worlds?

Almost fifteen, Alicia is smart and funny with a deep connection to the poet Sylvia Plath, but she’s ultimately failing at life. With a laundry list of diagnoses, she hallucinates different worlds—strange, decaying, otherworldly yet undeniably real worlds that are completely unlike her own with her single mom and one true friend. In one particularly vivid hallucination, Alicia is drawn to a boy her own age named Jax who’s trapped in a dying universe. Days later, her long-lost father shows up at her birthday party, telling her that the hallucinations aren’t hallucinations, but real worlds; she and Jax are bound by a strange past and intertwining present. This leads her on a journey to find out who she is while trying to save the people and worlds she loves. J.Q. Coyle’s The Infinity of You & Me is a wild ride through unruly hearts and vivid worlds guaranteed to captivate.

The Infinty of You & Me, a collaboration between authors Julianna Baggott and Quinn Dalton, is a fascinating take on multiverse theory.  Every decision made creates a new parallel universe.  And for Alicia, every single decision is a paralyzing moment, no matter how seemingly insignificant the choice.  Her entire life has been plagued by disorders and medications, which are now escalation into hallucinations.  It has left her, at times, barely able to function in the world.  Without the help of her best friend, life would probably be unbearable.

Alicia lives alone with her mother, her father long gone.  But during her birthday party, he shows up and explains to her that she isn’t crazy, that there is nothing wrong with her.  Her hallucinations are real, glimpses into other universes, a gift that not everyone has but that many want to use for their own purposes.

It is interesting to read books like this and compare the ways in which they make the multiverse real and viable.  In one series, a device is used to take a traveler from universe to universe.  In another, the traveler slips between the threads of frequencies that make up the “walls” between universes.  In this book, it is physical triggers of pain applied in specific places that does the trick.

As a fan of the multiverse genre, I really enjoyed this book.  The authors added some unique twists to the theory.

J.Q. COYLE is the joint pen name of Julianna Baggott and Quinn Dalton. Quinn is an acclaimed writer who has published short story collections and novels. Julianna is the author of over twenty novels, including Pure, a New York Times Notable (2012).

Critically acclaimed, bestselling author Julianna Baggott is the author of eighteen books, most notably her recent novel PURE, the first in a dystopian trilogy, a New York Times Book Review’s Editor’s Choice and a People magazine pick for books to read after the Hunger Games, on a list with Orson Scott Card and Philip Pullman. There are over fifty overseas editions of her books.

She’s the author of the National Bestseller Girl Talk, The Madam, and The Provence Cure for the Brokenhearted, for adult readers; and The Anybodies Trilogy and The Prince of Fenway Park for younger readers; as well as three collections of poetry, including Lizzie Borden in Love. She co-wrote Which Brings Me to You with Steve Almond, A Best Book of 2006 (Kirkus Reviews), which is optioned by producer Richard Brown and adapted by Keith Bunin with Matthew Warchus set to direct.

Her work has appeared in The New York Times, Washington Post, Boston Globe, Best American Poetry, Best Creative Nonfiction, NPR’s Talk of the Nation, All Things Considered, and Here & Now. For two years, her alter-ego, N. E. Bode was a recurring personality on XM Radio. Her work has been a People Magazine pick alongside David Sedaris and Bill Clinton, a Washington Post Book of the Week, a Girl’s Life Top Ten, a Booksense selection, and a Starbucks Bookish Reading Club pick.

She teaches at Florida State University, and is co-founder of the nonprofit Kids in Need – Books in Deed, getting free books to underprivileged kids in Florida. She’s married to David G.W. Scott and has four kids.

Quinn Dalton is the author of a novel, High Strung, and two story collections, Bulletproof Girl and Stories from the Afterlife. Midnight Bowling, a novel forthcoming from Carolina Wren Press on March 1, 2016.