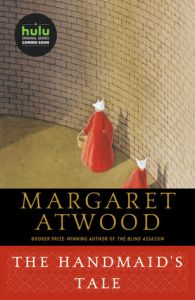 FTC Disclosure: I received this book for free from the bought in exchange for an honest review. This does not affect my opinion of the book or the content of my review.
WARNING: This book may be unsuitable for people under 17 years of age due to its use of sexual content, drug and alcohol use, and/or violence.

The Handmaid's Tale is not only a radical and brilliant departure for Margaret Atwood, it is a novel of such power that the reader will be unable to forget its images and its forecast. Set in the near future, it describes life in what was once the United States, now called the Republic of Gilead, a monotheocracy that has reacted to social unrest and a sharply declining birthrate by reverting to, and going beyond, the repressive intolerance of the original Puritans. The regime takes the Book of Genesis absolutely at its word, with bizarre consequences for the women and men of its population.
The story is told through the eyes of Offred, one of the unfortunate Handmaids under the new social order. In condensed but eloquent prose, by turns cool-eyed, tender, despairing, passionate, and wry, she reveals to us the dark corners behind the establishment's calm facade, as certain tendencies now in existence are carried to their logical conclusions. The Handmaid's Tale is funny, unexpected, horrifying, and altogether convincing. It is at once scathing satire, dire warning, and tour de force. It is Margaret Atwood at her best.

This book… there are no words for how much Atwood’s words affected me.  The book was originally published when I was about 16, but I didn’t read it.  In some ways, I regret that because I think it would have been interesting to compare the two experiences, 30 years apart.  Kim at 16 would have taken it in very different ways than Kim at 46.  But, on the other hand, I don’t think at that age I would have been able to fully appreciate the themes and implications of this novel.

The novel takes place in a dystopian near future (roughly 2004-2005). after society has fallen to a religious new order.  The USA is no longer, now known as the Republic of Gilead.  Society is based on a literal interpretation of the Book of Genesis, a rather chilling androcentric, misogynistic social order.  Birth rates have sharply reason, providing the justification for the new system.  Women have had virtually all of their rights taken away, reduced to categories like Jezebels (pleasure women), Marthas (cooks/housekeepers) and Handmaids (fertile breeding women).  Aunts are in charge of retraining the lesser women, indoctrinating them in the new world order.  Only the Commanders’ Wives have even a touch of freedom, but that, too, is limited.  The Handmaids even lose their names, becoming “Of-” and whatever the Commander’s first name is.

It is a disturbing look at sexual politics, particularly the ways in which sexuality is or isn’t expressed based on gender.  It is a book about power and how what is seemingly utopian for some, it is clearly dystopian for others.

This is a book that is extremely thought-provoking, especially in this day and age.  Despite the fact that it was published 31 years ago, there are so many themes in it that are just as relevant in today’s world.  There were times when I forgot I was reading a book that supposedly took place more than a decade ago.

The Handmaid’s Tale is a part of me now, one of those books that I will read again and again.  It is the kind of book that will give you a new experience each time it is read. 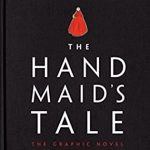