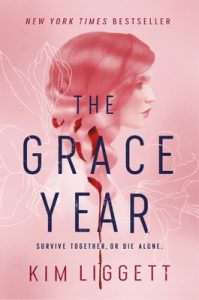 The instant New York Times bestseller, a speculative YA thriller in the vein of The Hunger Games and The Power, now in trade paperback.
No one speaks of the grace year. It’s forbidden.
In Garner County, girls are banished for their sixteenth year to release their magic into the wild so they can return purified and ready for marriage.
But not all of them will make it home alive.
Tierney James dreams of a better life—but as her own grace year draws near, she quickly realizes that there’s more to fear about the grace year than the brutal elements and the poachers in the woods.
Their greatest threat may very well be each other.
With sharp prose and gritty realism, Kim Liggett's The Grace Year examines the complex and sometimes twisted relationships between girls, the women they eventually become, and the difficult decisions they make in-between.

It’s only eleven days into the year, and I’m pretty sure I’ve read my favorite book this year. But it’s going to take a lot to measure up to this book, to how it made me feel, to how it affected my thinking. It is the kind of book that truly affects you and changes you. It was somehow both beautiful and terrifying, deeply emotional.

The novel is dystopian, revolving around an insular society that feels entirely possible and believable. The book opens with two quotes…

A rat in a maze is free to go anywhere, as long as it stays inside the maze.

Maybe there is a beast… maybe it’s only us.

Lord of the Flies, William Golding

The first quote is from my favorite book, the second from one of my least favorites. But both are utterly perfect representations for what The Grace Year is, with elements from both. As a dystopian novel, the story told is that of extremes. But at the fundamental level, after stripping away those extremes, I think it’s safe to say most, if not all, girls and women have experienced moments like those within the story. Moments of powerlessness, of misognyny, of in-fighting between women.

The story is brought to life by the writing, which is breathtakingly beautiful to read. It draws the reader in and makes them feel every nuance of the story. Liggett doesn’t shy away from the hard moments, which I truly appreciated. The world in which these girls and women live is hard and shouldn’t be glossed over. It’s a world in which women are subjugated, happy endings neither expected nor even truly dreamed of. Yet, as horrifying as much of the book was, I was left feeling proud of my womanhood, even hopeful. It is an allegory for the female experience, created in an extremely entertaining and engrossing way.

This is a book that a reader needs to begin with an open mind and heart, which is why I shared little of the plot. It’s a book that needs to be experienced on a personal level.

Tonight, I became a wife.
All because a boy claimed it so.

The grace year is ours. This is the one place we can be free. There’s no more tempering our feelings, no more swallowing our pride. Here we can be whatever we want.

We hurt each other because it’s the only way we’re permitted to show our anger. When our choices are taken from us, the fire builds within.

My eyes are wide open, and I see everything now.

Kim Liggett, originally from the rural midwest, moved to New York City to pursue a career in the arts. She’s the author of Blood and Salt, Heart of Ash, The Last Harvest (Bram Stoker Award Winner), The Unfortunates, and The Grace Year. Kim spends her free time studying tarot and scouring Manhattan for rare vials of perfume and the perfect egg white cocktail.