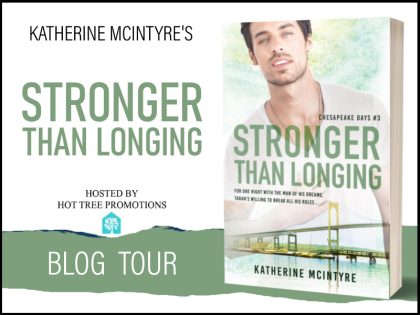 Return to small-town Chesapeake and fall in love with the single-dad bad boy who keeps breaking hearts, and the adorable geek who can’t help but fall head over heels for his brother’s best friend.

For one night with the man of his dreams, Taran’s willing to break all his rules…

Taran’s always been the reliable one. Safe. Which is why he keeps getting dumped by the assholes he dates. And after the latest round of “too boring,” he’s ready to drink his blues away. That’s until Silas King shows up—the gorgeous guy he’d swooned over through high school.

Silas wants one more night of distraction before his new reality sets in, and he sets his sights on Taran, his friend’s little brother who’s looking sexier than ever. It’s not like he can get in any more trouble than he’s already found himself in.

After Taran and Silas spend one unforgettable night together, feelings emerge, ones quickly stamped out when Silas confesses why he’s back in town. He’s returned to meet his three-month-old daughter.

With that chaos in his life, Silas can’t pursue anything further with Taran, and having longed for Silas his whole damn life, Taran isn’t sure he’ll survive the aftermath. Yet the more they try to avoid their connection, the more they keep colliding… until the passion between them detonates.

He needed to get drunk tonight. Do something stupid.

Prove once and for all he wasn’t as boring as every fucking guy he dated said he was.

Taran took another swig of his drink. And then another.

“Is this seat taken?” a rich, deep, familiar voice said beside him.

Taran swung his head to look at the newcomer. The guy was tall and broad-chested, his motorcycle jacket fitting him to perfection, and those jeans didn’t leave much room to the imagination with the way they displayed the definition of his muscular thighs. Black ink crept up past his collar and along the side of his neck. The tattoos covered his knuckles as well and were the sort that inspired curiosity. With a wide jaw, windswept deep-mahogany hair brushing his ears, bright too-blue eyes, and thick, stunning lashes, the man was the sort of gorgeous that landed like a punch to the solar plexus.

The sort of gorgeous that had sent Taran walking straight into his locker or tripping over air back in high school. The sort of gorgeous Taran had tried to forget about even though his heart still sped overtime during every moment he spent around the guy who’d been two years ahead of him and was one of his brother’s friends.

The guy who’d never given him a second glance, even though Taran had spent far, far too long obsessing and wishing.

Silas King was back in Chesapeake City.

Katherine McIntyre is a feisty chick with a big attitude despite her short stature. She writes stories featuring snarky women, ragtag crews, and men with bad attitudes—and there’s an equally high chance for a passionate speech thrown into the mix. As an eternal geek and tomboy who’s always stepped to her own beat, she’s made it her mission to write stories that represent the broad spectrum of people out there, from different cultures and races to all varieties of men and women.