Let the Wind In

by Stacey Donovan, author of Dive

When I was a teenager, traveling to the faraway places my favorite uncle went was not part of my experience. He sent postcards, always a thrill. From Europe he once wrote: Enjoy everything, even the unpleasant things. I loved him even more for sending such a sophisticated message. It made me feel special and that maybe I could learn special things about life. I must admit that it has been a challenge to enjoy unpleasant things, especially what hurts, or makes no sense, violence toward innocent creatures, wet feet in snow.

I was lucky to have parents who both read a lot of books, to discover the musty classics in the basement: the Greeks, Russians, French, Irish – and more. Upstairs the shelves held the contemporary stuff: espionage, romance, thriller, fantasy, crime, glorious trash fiction, literature whose words reeled through me. The uncle I mentioned, a writer, would send picture books a few times a year.

Those books – realities in my life – led the way to my own character development.

It has been a challenge to think of what is behind character development, and also about character inspiration, which I believe is different from development. Inspiration in regard to creating characters has come as a result of not only observation (an aspect of development) but as part of my search to understand life, what it is to be alive, and sometimes, to try to enjoy everything, even the unpleasant things.

In Dive, there is protagonist V’s younger sister. Her nickname is Baby Teeth, so named because her deciduous teeth stuck around long past the usual time. My own little sister experienced that, and I called her Baby Teeth for a while. I also rode her home from school on my bicycle handlebars and tried to protect her from some of the unpleasant things that had come my way before she showed up. What Baby Teeth the character does next is not what happened in real life.

As the story unfolds, Baby Teeth’s habit of appearing uninvited at neighbors’ houses escalates. It’s her way of trying to understand what’s happening in her own little world, to observe with surprise someone wearing slippers midday, another’s fondness for baloney sandwiches, to watch a spider intently spreading its web while BT pees in an unfamiliar bathroom. Baby Teeth (at the suggestion of someone else’s mother) would call home to say where she was and V usually traipsed over to collect her. They had many talks about cowbirds, buffaloes, how celery could be so long and was it really a vegetable, what it meant to let the wind in. Underneath Baby Teeth’s questions was her desire to understand more about the living in the world.

That was because her world now teemed with uncertainty. Why was her daddy in the hospital, who ran over their little dog and could just drive away after that, how come her mother sat in the blue chair all night, why did her older brother only grunt instead of talk to anyone these days.

The three siblings wrestled with uncertainty. They did not yet understand that change is the nature of life, that a parent can become fatally ill in an instant, that cruelty races down the road with no warning, that decisions no one anticipates insist to be made.

V’s own challenges develop through the story. Many firsts occur: love, death, betrayal (*no story spoilers here). Amid these experiences, poetry becomes an elemental part of her passion, and learning that life means you can find hope in pain and loss. V grasps onto words as she tries to make sense of life.

I did not write Dive yesterday – it was my first novel. With the opportunity to revisit it again, I realize now how much writing it meant so much to my own development as a person, and that inspiration has arisen out of uncertainty. It’s all about diving into life. 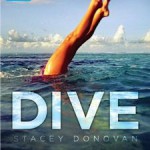