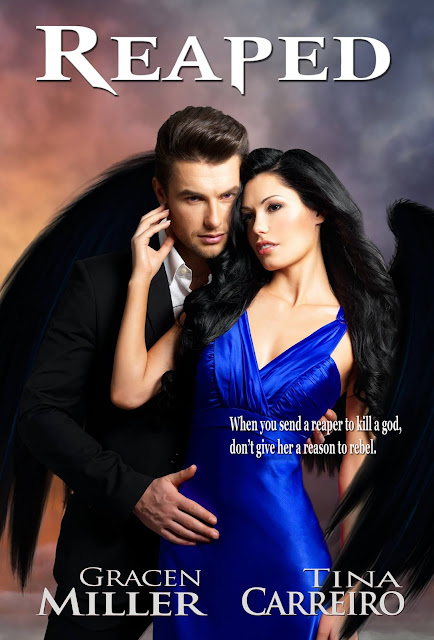 Welcome to the Reaped Book Tour

WARNING: This is a work of fiction. Reaped is told through the eyes of the dark side. We understand the mythical and religious spin within this book may be hard for some to read. So if you fit that mold, please don’t be tempted to open the book. If suspending belief is something you have a hard time with when religious aspects are involved, please refrain from reading. This work of fiction is not to be taken seriously. This book was written from our creative view and intended for entertainment purposes only. The book was not written to be incendiary or inflammatory. So before you pass judgment, remember, that’s reserved for God.

God ordered her to reap him…

Forged by her father’s hand to reap at His command, Solas was God’s most skilled Reaper. Killing on command, she had never questioned His directives—until now. Too bad Loki’s heart isn’t as black as she’s been led to believe. That would make her job easy. But she cannot dismiss the goodness she senses inside him. Bewildered by her attraction to Loki, she still craves returning home, but knows the only way back into her homeland is to obey God’s order. As the lines between allies and enemies are blurred, she questions who is weaving the biggest deception… the legendary trickster god or her own father?

But she can’t bring herself to swing her blade.

From the moment she fell at his feet, Loki mistrusted Solas. His intentions were simple, to use her and send her on her way. Then he discovered she was cast out of her homeland after defying her father’s order to reap him. Intrigued by a woman that would stand against the supreme God, Loki offers her his temporary protection while nursing his skepticism. Many warriors from the heavens have been sent to kill him, but only one has come this close. She’s the perfect weapon. A threat not just to his life, but also to his family and everything he stands for. He should take her life, but he craves protecting her and the secret she harbors more.

When you send a reaper to kill a god, don’t give her a reason to rebel.

A tentative alliance between Loki and Solas is brokered, but misunderstandings strain their fragile relationship. Battles are won and lost, but can Solas escape her father’s will? Faced with hard choices, Loki will have to decide what’s important to him. Or can he pull off the ultimate trick and win their freedom? 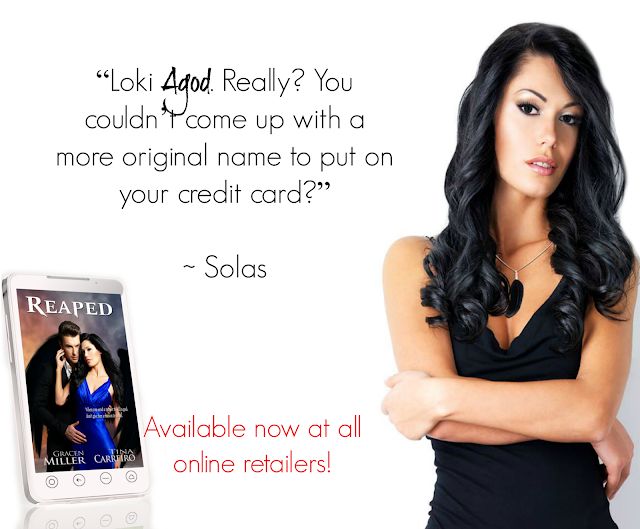 Loki laughed. “You wish you did,
but I recognize that look in your eyes. Right now you’re curious what I’ll
teach you first… and if you’ll like it. I promise by the time I’m finished
teaching you the ways of pleasure, I’ll have your body so trained you’ll quiver
in need from a feather-light caress.”
Solas crossed her arms beneath her
breasts and leveled him with an incensed glare. “Your arrogance is—I’d say
amazing, but that’s inaccurate. Atrocious is more like it.”
“Can’t be arrogance if it’s true.”
She knocked his hand aside. In
return, he gripped her chin tighter and forced her head back so her undivided
attention landed on him. “Listen carefully. I give you one warning only because
you don’t know my ways. The next time you touch me like that, I’ll punish you.”
With defiance shining from her
black eyes, she leaned back, disconnecting his hold. “Nothing’s stopping me
from killing you, trickster.”
Her voice might’ve been impersonal,
but her gaze had his cock jerking in his pants. If she lowered her focus, no
way she’d miss his erection.
“It’s Loki, and if you wanted me
dead, you wouldn’t be threatening me. Not that you’re a match for me.” He waved
a finger at her. “God, remember?”
“I forgot, pity the delusional
angel.”
He almost laughed at her sarcasm. “Better
reapers than you have tried to snuff me.”
In the next breath, she had him
against the wall with her forearm to his throat. “I realize crushing your
windpipe won’t harm you, but never underestimate me, Loki. I’m sent in when all
others fail.”
Good to know, but he couldn’t
resist prodding her. “And yet you failed, too.”
“Unwise choices.” And they were
back to that again. She lowered her arm and stared up at him. “Let’s not
pretend for one moment I’m here for any reason other than I chose to be.”
“Another unwise choice, Solas?”
“I’m getting good at them.”
“How human of you.”
Mutiny blazed from her stare, and
she angled her chin a notch higher. Damned if that wasn’t one of the pious
angel glares he’d become accustomed to throughout his life. Hers had the
opposite effect on him. Instead of driving his spear into her, he wanted to
drive his cock into her body.
“So you’re choosing to stay with
me?” He fingered her hair, relishing the cool silkiness of the locks.
She executed a dismissive
one-shoulder shrug. “I can’t return to Heaven.”
“Unless you kill me.” Not that he
would stand by and allow her to gut him, but he was curious what she’d say.
The dry smile failed to touch her
eyes. “There is that.” 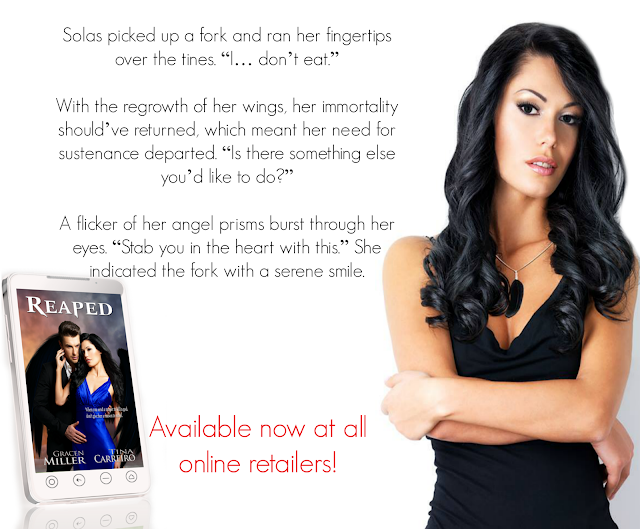 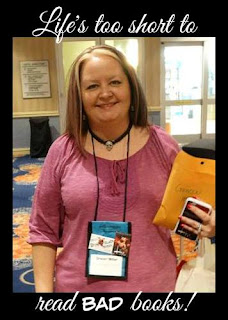 Gracen is a hopeless daydreamer masquerading as a “normal” person in southern society. When not writing, she’s a full-time mom for her two sons and a devoted wife to her real-life hero-husband. She has an unusual relationship with her muse, Dom, but credits all her creative success to his brilliant mind. She’s addicted to writing, paranormal romance novels and movies, Alabama football and coffee…addictions are not necessarily in order of priority. She’s convinced coffee is nectar from the gods and when blending coffee and writing together it generates the perfect creative merger. Many of her creative worlds are spawned from coffee highs and Dom’s aggressive demands. To learn more about Gracen or to leave her a comment, visit her website at www.gracen-miller.com. 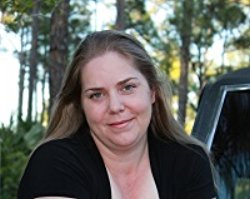 Tina Carreiro is a multi-published author who resides in South Florida with her family. At the young age of 15, Tina started working to help her family and became a jack-of-all-trades, working in many different areas from managing an automotive shop, to putting her computer programming degree to use. In 2010, she retired from her office job to live her dream and write. Her addiction to romance novels began at a young age when she started sneaking her mom’s Gray Eagle series by Janelle Taylor, and it was then her love for writing began. Her paranormal romance series, Power of the Moon, has gained popularity amongst the fans of this genre. Tina became a co-host on Encounters Live, a paranormal radio show, in 2009. Open to all things paranormal, Tina has had her own encounters with the paranormal but still approaches the topic from a logical angle. Tina is married to her best friend and Encounters Live co-host, Matt Carreiro, and is a full-time Boy Scout/camping/PS3/Minecraft mom for her son and daughter. When not writing, Tina enjoys reading romance novels, zombie movies, restoring classic cars, camping, and coffee with caramel macchiato creamer. Poking fun at herself, and everything in between is her key to laughter and a long and healthy life.
To learn more about Tina or to leave her a comment, visit her at http://tinacarreiro.com.