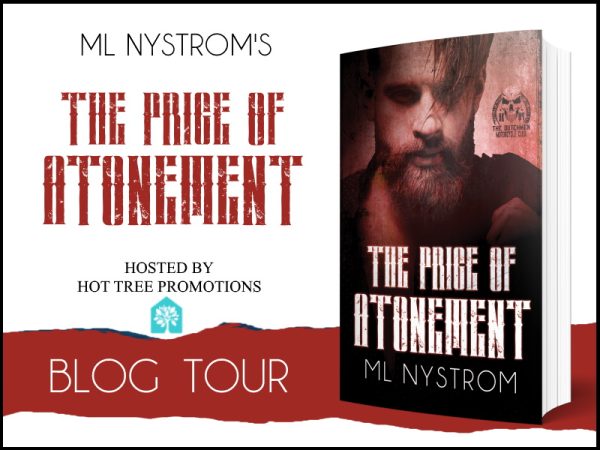 The Price of Atonement

Everyone has a breaking point—even me. Meet a darker breed of bikers in bestselling author ML Nystrom’s gritty The Dutchmen MC series.

Abandoned by his club, Boots is trying to find a new place and new purpose in his life.  His past plagues him with darkness, and if he faces it, there’s no turning back to the light. The brightest spot in his black universe is another man’s woman, Mama J.

Janice is by herself and struggling to make ends meet for herself and her children. Day after day, night after night, her life revolves around her identity as a mother and seldom as a woman. Then one day she meets Boots.

Mama J is discovering what it means to be Janice again, and Boots is desperately seeking to pay for his former sins. Is the price of atonement too high?

Boots traced a finger over the image of the flaming horse skeleton that had been depicted in mid gallop. Fifteen years, he’d given to the Dark Horses. Fifteen years of blood, sweat, and sacrifice for a brotherhood that no longer existed. Fifteen years of doing things for his club no one wanted to do, but he did them because they had to be done. He’d gone to prison to protect his brothers, and, in the end, none of them remained. This left a bitter taste in his mouth. “Guess you didn’t hear me. I’ve got nothing left. I’m fucking starting over at age forty-five and don’t have a goddamn clue what I’m going to do. All I know is boats, bikes, and the river. Can’t do that on probation ’cause I can’t get a boating license. If I’m caught, I’m back behind those walls again.”

Rail climbed into the truck. “Invitation to patch over is on the table. The Dutchmen got new things going with the marina and the Harbor Bar and Grill. Between the boat garage, marina rentals, and the bar, we’re doing good. The club will never be rich, but then again, we never were, anyway. We got brothers working the legit side of business now and breathing easy cause we don’t have to worry about bullets finding us in the dark.”

Boots followed Rail’s example and loaded his big frame into the truck cab. He tossed the plastic bag onto the small seat of the extended cab and held the old cut in his heavy fist. A patch-over to the Dutchmen MC had never been on his radar, but the possibility intrigued him. What else did he have to lose? He no longer had a home or a place to be. He’d spent a lot of his life as a biker. At one time he had different plans, but now, he couldn’t see himself doing anything else. “How long can I think about it?”

“As long as you need, brother. There’s a cabin you can use that’s not too far from the clubhouse. Iceman’s old place. Not fancy, but you’re welcome to use it for as long as you need it. You want work, I can find something for you, or you can find your own thing. Up to you. You had our backs for years. We got yours now.”

Boots looked at the cut in his hands, one that used to be his entire world, and he made a decision. He hit the button to roll down the window, and he tossed the crumpled cut to the ground. “Long drive to Red Wing. Let’s get the fuck out of here.”

I’ve had stories in my head since I was a child.  All sorts of stories of fantasy, romance, mystery and anything else that captured my interest.  I’m a voracious reader, and have spent many hours in my life devouring books, therefore it’s only fitting I should write a few myself!

I’ve spent most of my life as a performing musician and band instrument repair technician, but that doesn’t mean I’m pigeon-holed into one mold.  I’ve been a university professor, belly dancer, craftsperson, soap maker, singer, rock band artist, jewelry maker, lifeguard, swim coach, and whatever else I feel like exploring.  As one of my students said to me once, “Life’s too short to ignore the opportunities.”   I have no intention of ever stopping so welcome to my story world.  I hope you enjoy it!