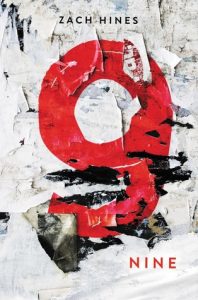 In an alternate world startlingly close to our own, humans have nine lives—and they can’t wait to burn straight through them.
As you shed lives, you shed your awkward phases: one death is equal to one physical and mental upgrade. Julian’s friends are obsessed with the idea of burning lives, but Julian is determined to stay on his first for as long as he can. His mother, the ultimate cautionary tale, burned through her first eight in just a few years, and Julian has no intention of succumbing to the debilitating rebirth sickness that she inflicted on herself.
But the regime has death incentives aimed at controlling overpopulation, and Julian realizes that he’s going to have to burn at some point—especially when he becomes a target for Nicholas, the manipulative leader of the Burners, the school’s suicide club. And when Julian eventually succumbs, he uncovers suspicious gaps in the rebirth system that may explain exactly why his mother went so far down the rabbit hole years ago. Along with a group of student dissenters, Julian sets out to find answers and is soon on the verge of exposing the greatest conspiracy ever unleashed on the world.
He has just eight more lives to uncover the brutal truth.

Nine by Zach Hines was a fantastic YA dystopian read! The world, an alternate reality, was somehow both familiar and alien, which made it that much more intriguing. The premise of Hines’ world was fascinating, based on the idea of having multiple lives, but not in a way anyone would imagine. Technology is advanced, giving each person nine lives. With each “burned” life, one receives mental and physical upgrades. With that comes, too, upward mobility. Most people want to burn through the first few of their lives, but there are those who aren’t quite as on board with it.

This was a engrossing read. There are so many twists and turns that kept me turning the pages. Like all the best fictional utopian constructs, the dystopian aspect was chilling. And that is what I love most about dystopian novels, the darkly intriguing realization that that could be my own world.

If you love dystopian reads, this is a great one with an interesting concept.

Zach Hines is a novelist and screenwriter. Originally from West Virginia, he was based in Hong Kong, where for over ten years he worked as a journalist. He now lives in Los Angeles.

« Links
Into the Garden »