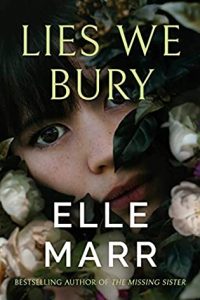 A novel about secrets and revenge by the number one Amazon Charts bestselling author of The Missing Sister. It’s only by confronting who she was then that she can understand who she is now.
I was born in captivity…
Two decades ago Marissa Mo escaped a basement prison—the only home she’d ever known. At twenty-seven, Marissa’s moved beyond the trauma and is working under a new name as a freelance photographer. But when she accepts a job covering a string of macabre murders in Portland, it’s impossible for Marissa not to remember.
Everything is eerily familiar. The same underground lairs. Sad trinkets and toys left behind, identical to those Marissa had as a child. And then there is the note meant just for her that freezes Marissa’s blood: See you soon, Missy.
To determine the killer’s next move, Marissa must retrieve her long-forgotten memories and return to a past she’s hidden away. But she won’t be facing her fears alone. Someone is waiting for her in the dark.

Lies We Bury is an intense thriller about the past coming back to haunt.

Marissa was literally born in captivity, living for years in a basement with the mothers and her sisters. It’s been twenty years since she escaped with her own mother and sisters, and she has done all she can to escape her past. With the ongoing public interest in what happened to them, that hasn’t been easy. She’s gone so far as to change her name in her attempt to start over. But there is someone who doesn’t want that to happen for her. And to top it all off, someone from her past is coming back, someone she wants nothing to do with.

The book is part thriller, part mystery, part family dynamic. It has so many twists and turns, ones that kept me turning the pages and trying to figure out the answers. I loved Claire’s character, even when she made choices that made me want to scream at her. I enjoyed all the characters. The author did a really wonderful job of making diverse characters, showing how differently people can respond to a shared experience, how differently they might develop.

If you love a great thriller, with some very creepy vibes, this is a good one to read!