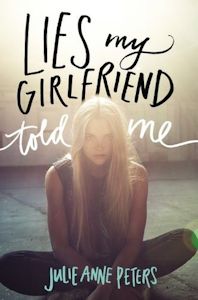 When Alix's charismatic girlfriend, Swanee, dies from sudden cardiac arrest, Alix is overcome with despair. As she searches Swanee's room for mementos of their relationship, she finds Swanee's cell phone, pinging with dozens of texts sent from a mysterious contact, L.T. The most recent text reads: "Please tell me what I did. Please, Swan. Te amo. I love you."

Shocked and betrayed, Alix learns that Swanee has been leading a double life--secretly dating a girl named Liana the entire time she's been with Alix. Alix texts Liana from Swanee's phone, pretending to be Swanee in order to gather information before finally meeting face-to-face to break the news.

Brought together by Swanee's lies, Alix and Liana become closer than they'd thought possible. But Alix is still hiding the truth from Liana. Alix knows what it feels like to be lied to--but will coming clean to Liana mean losing her, too?

I just received this book in Friday afternoon’s mail and was finished by Saturday morning.  I just couldn’t put it down!

Alix is a 17yo girl who goes to bed one night and wakes up the next morning to find that her world has changed irrevocably.  Her girlfriend Swanee unexpectedly died while running.  What follows is a twisted tale of sadness and grief, frustration and confusion, lies and betrayal, loss and change, healing and love.  At first, Alix is lost in denial, unable to believe that her girlfriend is dead.  Then the secrets begin to be revealed and she is torn between grief and anger.

One of the things I loved most about this book was that it was, at it’s heart, about all of those emotions that surround loss and betrayal, love and forgiveness.  Yes, the main characters were lesbians, but (other than a few rather minor moments) that wasn’t the focus of the book.  It was just who they were.  It was refreshing to read a story that featured lesbian characters without making that the most important thing about the characters.  I often feel that sometimes so much attention is paid to that aspect of the characters that it creates a divide.  This is a story with themes that are entirely universal.

One of the other things I loved was the growth of Alix’s character.  At the beginning, she made some questionable choices, both before and after Swanee died.  By the end, she has grown considerably.  One of her most important lessons was that the grass isn’t always greener in other places.  She looked at Swanee’s life and family through rose-colored glasses, not ever really seeing the truth that lay beneath the surface.  This realization led to some self-discovery for Alix, which I really loved.

There was a sweet smaller plot line that made my heart sing, too, the story of Alix and her baby brother.  There was so much I couldn’t understand about that relationship, seeing Alix as a bit of a brat when it came to him.  As the book progresses, we learn so much more about that and suddenly it all becomes clear.  I loved the story!

I really loved this book!  I thought that the story was beautiful and touching, with universal themes that touch us all!

Julie Anne Peters was born in Jamestown, New York. When she was five, her family moved to the Denver suburbs in Colorado. Her parents divorced when she was in high school. She has three siblings: a brother, John, and two younger sisters, Jeanne and Susan.

« Flying With Fire Mini Tour
A Matter of Mercy »