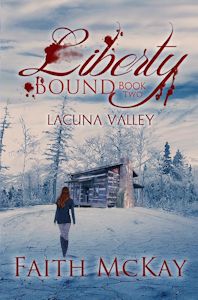 [color-box]All Sam ever wanted was to be free of her mother. With a happy home and Nick at her side, life should be great. But life has never been that simple. With the werewolves angry, the deal with the seasonals broken, and her mother on the run with the orb, Sam is more lost than ever. This would be a great time to make use of her prophetic dreams, if she could only figure out how to navigate them. While Sam seems powerless, her little sister is not, and everyone wants to take advantage of her wish-granting abilities. It's all Sam can do to keep them at bay. At nine years old with powers that could save—or end—the world and a mother who left her for dead, Violet's had more than her share of awful. Sam's not about to let anything else happen to her sister. But Violet is starting to realize that with all her power, maybe she doesn't need Sam's help at all.[/color-box]

Liberty Bound is the sequel to  Prophecy Girl and was just as engaging as the first!  The world that the author created in the first book somehow becomes even more mysterious in the second.  Werewolves, seasonals, prepubescent puppetmasters, protectors, and psychotic mothers… the characters are wide and varied!  The world is our own, but woven with its own mythology that changes everything!

I love, love, LOVE the characters in these books!  No matter what their role is in the story, they are fantastic.  The events of the last book have turned the world upside down for Sam, Nick, Violet, and the others and their characters show that.   It is clear the Sam is floundering in the fallout, struggling with her own identity, with trust, with her sister.  There is definitely no small amount of self-pity and wallowing there, which she is called on again and again by Alzina and her little sister.  But who wouldn’t be wallowing in the same situation?!  Nick is in the midst of his own struggles but still remains faithfully by Sam’s side, loyal almost to a fault.  And Violet… oh my.  Imagine a 10yo with puppetmaster problems and attitude.  It  is a lethal combination!!  We saw a lot more of Alzina this time, with whom Sam gains a rather tenuous friendship. But Isobel, with all of her inherent coldness, is one of my favorites.  She is hilarious without even understanding that she is!!

Much of the book centered around Violet and her growing awareness of her own power.  This is the most deliciously creepy little girl you can imagine.  Attitude and a potentially destructive power is not a good combination.  Reading about her made me eternally thankful for my power-free kids!  She is an angry little girl, quick to lash out, and she doesn’t seem to grasp the realities of her power.  She will follow whoever seems to suck up the best at any given moment, regardless of the consequences.

And the cliffhanger…!  It is FANTASTIC, yet I am fairly certain that the wait for the next book is going to drive me insane!

When she’d started keeping a happy face it had been to make the people around her feel better.  It wasn’t long before she realized how much better it made herself feel (Loc. 33).

Monsters were scary, but families were her biggest fear (Loc. 58).

We could be nice all we wanted.  It doesn’t mean things would be any better.  Nice.  What does nice get anybody (Loc. 1826)?

I’m not saying it’s easy, but clinging to your pain like this is just silly.  It’s not going to fix your problems (Loc. 1836).

The creepiness,  the mystery, the angst…  all of it combines to make for a great read!  A definite must read, AFTER reading Prophecy Girl.