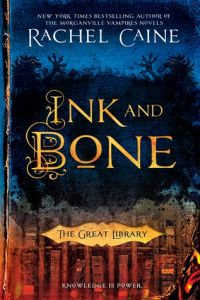 In an exhilarating new series, New York Times bestselling author Rachel Caine rewrites history, creating a dangerous world where the Great Library of Alexandria has survived the test of time.…

Ruthless and supremely powerful, the Great Library is now a presence in every major city, governing the flow of knowledge to the masses. Alchemy allows the Library to deliver the content of the greatest works of history instantly—but the personal ownership of books is expressly forbidden.

Jess Brightwell believes in the value of the Library, but the majority of his knowledge comes from illegal books obtained by his family, who are involved in the thriving black market. Jess has been sent to be his family’s spy, but his loyalties are tested in the final months of his training to enter the Library’s service.

When he inadvertently commits heresy by creating a device that could change the world, Jess discovers that those who control the Great Library believe that knowledge is more valuable than any human life—and soon both heretics and books will burn.…

Ink and Bone is the first book in the new Great Library series and it is such an interesting premise, rewriting history in a way that is absolutely intense for anyone who truly loves the written word.

In this world, knowledge, or too much of it, is seen as almost a disease, the foundation of ruin if put in the wrong hands.  It is the prevailing belief that too much knowledge can cause corruption so it must be contained and controlled, the function of the Great Library of Alexandria and its satellite libraries around the world.  In keeping with that, it is illegal to own a physical copy of any book.  The Great Library employs a paramilitary army that seeks out anyone that breaks that law, along with the help of automaton who will destroy anyone and anything in their path.

But this doesn’t mean that ordinary people have no access to books.  They do.  Each person has what is called a blank on which they can read approved material, much like an e-book.  In fact, knowledge is so important to the Library that each person is given journal in which they write everything about their own lives.  At death, those journals are kept and maintained by the Library, an eternal record of that person’s existance.

The protagonist of the story is Jess, a postulate new to the Library and coming from a questionable past.  His family’s livelihood is smuggling, the black market trade of books… people for whom the very organization he is now a part of is the enemy.  He is torn, loving the written word and wanting it preserved for the future, but also understanding the value of having that knowledge available for everyone.  The control of the Library is so complete that even the idea of mass production is considered heresy.

I love that books were given such significance in this world, expressed in the value not only the Library placed on them, but in the booming black market trade to own physical copies.  The control of knowledge is horrifying to me and the extremes that the Library took to maintain that equally frightening.  But the reality is that, although it was exaggerated and extreme in this book, this kind of attempted control is not a new concept even in our world.  All the time, books are challenged in school systems and other institutions, calling for bans and removals from school reading lists.

I loved this book so much!  There were scary moments right along with the happy and funny moments.  And it is a book that makes you think, which I love!  A definite must-read for lovers of books and free access to them!

Rachel Caine is the New York Times bestselling author of more than 45 novels to date, and many short stories, including fantasy, urban fantasy, science fiction, young adult fiction, mystery, thriller, and horror. Her notable series include The Morganville Vampires, Weather Warden, Revivalist, Red Letter Days, and Outcast Season novels. She graduated from Socorro High School in El Paso, Texas, and earned a Bachelor of Business Administration degree from Texas Tech University in Lubbock, Texas. Her first short story was published in 1990, and her first novel in 1991.

After a long career in business (including working as an office manager, payroll manager, insurance investigator, web designer, graphic designer, and corporate communications executive) she began writing full time in 2009.

She and her husband, artist R. Cat Conrad, live and work in Fort Worth, Texas.

Rachel Caine is a pen name of Roxanne Longstreet Conrad.

« The Silver Gryphon
Bury the Hatchet »