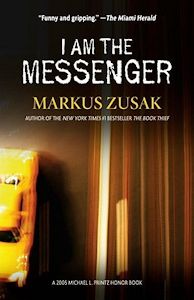 Ed Kennedy is an underage cabdriver without much of a future. He's pathetic at playing cards, hopelessly in love with his best friend, Audrey, and utterly devoted to his coffee-drinking dog, the Doorman. His life is one of peaceful routine and incompetence until he inadvertently stops a bank robbery.

That's when the first ace arrives in the mail.

That's when Ed becomes the messenger.

Chosen to care, he makes his way through town helping and hurting (when necessary) until only one question remains: Who's behind Ed's mission?[/color-box]

I am the Messenger is one of the more bizarre books I have ever read.  It is one of those books that caused me to question myself continually about why I was reading it, yet, at the same time, I couldn’t put it down.  Even now, having finished it, I am not sure how I feel about it.  But it sticks with me, so that is a five-mug read in my opinion!Ed Kennedy is a rather ambitiousless young guy, a cabdriver with no real future ahead of him.  He is hopelessly in love with Audrey, something that she seems to not know.  He is completely devoted to her and to his dog, Doorman.  Doorman is a character in and of himself.  He’s addicted to coffee, old, smelly, and basically the canine equivalent of Ed himself.  The product of routine and stagnation inthat routine.

But then one day, things change for Ed when he inadvertently foils a bank robbery.  He receives a card in the mail with mysterious instructions and this is how he becomes the messenger.  And what is the messenger?  Part guardian angel, part avenging angel.  He follows the instructions on the cards given to him, not knowing who is behind them.  For the first time in his life, he has purpose.

I enjoyed that theme and that is probably what kept me reading.  But the rational part of me kept questioning… who would blindly follow such odd instructions?  Especially when sometimes they are less helpful, and more violent.  But I love the bluntness of the character, the unabashed portrayal of a person who, for most of his life, is just there.  Nothing special.  All of the characters were like that… blunt.  Their edges weren’t smoothed for the sake of likeability.  They were who they were and they reminded me of people I knew.  They were real.  And that is what kept me reading!

Markus Zusak was born in 1975 and is the author of five books, including the international bestseller, The Book Thief , which is translated into more than forty languages. First released in 2005, The Book Thief has spent a total of 375 weeks on the New York Times bestseller list, and still remains there eight years after it first came out.

His first three books, The Underdog, Fighting Ruben Wolfe and When Dogs Cry (also known as Getting the Girl ), released between 1999 and 2001, were all published internationally and garnered a number of awards and honours in his native Australia, and the USA.

The Messenger (or I am the Messenger ), published in 2002, won the 2003 Australian Children’s Book Council Book of the Year Award (Older Readers) and the 2003 NSW Premier’s Literary Award (Ethel Turner Prize), as well as receiving a Printz Honour in America. It also won numerous national readers choice awards across Europe, including the highly regarded Deutscher Jugendliteratur prize in Germany.

It is The Book Thief , however, that has established Markus Zusak as one of the most successful authors to come out of Australia. To date, The Book Thief has held the number one position at Amazon.com, Amazon.co.uk, the New York Times bestseller list, as well as in countries across South America, Europe and Asia. It has also been in the top five bestsellers in the UK and several other territories. It has amassed many and varied awards, ranging from literary prizes to readers choice awards to prizes voted on by booksellers. It was the only book to feature on both the USA and UK World Book Night Lists in 2012, and has now been adapted into a major motion picture.

The Guardian calls The Book Thief “a novel of breathtaking scope, masterfully told.” The New York Times: “Brilliant and hugely ambitious…the kind of book that can be life-changing.” The Age: “an original, moving, beautifully written book.”

Markus Zusak grew up in Sydney, Australia, and still lives there with his wife and two children.