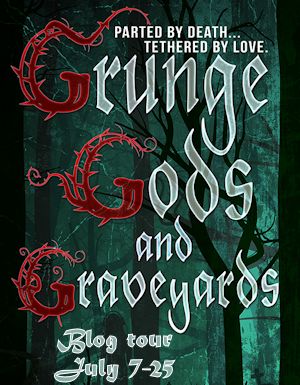 Welcome to the Grunge Gods and Graveyards Book Tour!

I am honored to be hosting a stop on this blog tour for Kimberly G. Giarratano’s new release, Grunge Gods and Graveyards!  Kimberly has shared a guest post with us, so read on to read that post and learn more about her and the book!

I loved this book and I know that you will, too!  You can read my review of this amazing read here.

You can visit other stops on the tour here!

Since my debut novel is a paranormal romance set in 1996, I thought it would be fun to blog about my favorite ‘90s pop culture relationships. These are in no particular order because I can’t play favorites.

Lois and Clark from The New Adventures of Superman: Dean Cain was a fundamental hottie back then and he made for the best eye candy. In fact, I found Clark way more attractive than Superman. Something about Superman’s slick hair screamed arrogance. Clark was the soft side to Lois’ sharp edge. The will-they or won’t-they part of their relationship made for excellent sexual tension.

Mulder and Scully from X-Files: I was a diehard X-Files fan. There wasn’t an episode, no matter how creepy (looking at you ‘Home’ episode) that I missed. And like all fans, I soooo wanted Mulder and Scully to get together. I mean I did, but I didn’t. I loved their platonic friendship, but deep down they loved and protected each other. Man o’ man, the fanfiction that this show built.

Doug and Patti Mayonnaise from Doug: (Doug, the preteen Rugrats) Aww, Doug. You were a good catch. All those cute things you did to impress Patti. It was really hard not to root for a preteen cartoon who only had eyes for one girl.

Tom Hanks and Meg Ryan from Sleepless in Seattle and You’ve Got Mail: There’s so much to luuurve in Sleepless. Meg Ryan’s hair, her clothes, a young Gaby Hoffman speaking in, what’s pretty much, text speak. You’ve Got Mail’s premise was entirely about online dating…in 1998! And they had a business feud over books! How timely.

Buffy and Angel from Buffy the Vampire Slayer: Before his Bones days, David Boreanaz was Angel and he was uber hot. A vampire with a conscious predating Twilight. And Buffy was a slayer. It was her job to hunt and destroy vamps like him. Their relationship was sexy and complicated and not meant to last. Sigh…

Cher and Josh from Clueless: I’m still crushing on Paul Rudd 20 years later. He’s Jewish and from New Jersey (like me!) — I want to make him my boyfriend. Amy Heckerling’s modern adaptation of Jane Austen’sEmma featured Cher as a Bel Air Emma and Josh as a less gallant, more goofy version of Mr. Knightley. Could there be a more perfect couple? As if!

Alright you java-lovin’ readers — what ‘90s relationships were you all about? Sound off in the comments!

Parted by death. Tethered by love.Lainey Bloom’s high school senior year is a complete disaster. The popular clique, led by mean girl Wynter Woods, bullies her constantly. The principal threatens not to let her graduate with the class of 1997 unless she completes a major research project. And everyone blames her for the death of Wynter’s boyfriend, Danny Obregon.Danny, a gorgeous musician, stole Lainey’s heart when he stole a kiss at a concert. But a week later, he was run down on a dangerous stretch of road. When he dies in her arms, she fears she’ll never know if he really would have broken up with Wynter to be with her.Then his ghost shows up, begging her to solve his murder. Horrified by the dismal fate that awaits him if he never crosses over, Lainey seeks the dark truth amidst small town secrets, family strife, and divided loyalties. But every step she takes toward discovering what really happened the night Danny died pulls her further away from the beautiful boy she can never touch again.

Kimberly G. Giarratano, a forever Jersey girl, now lives in the woods of northeastern Pennsylvania with her husband and small children. A former teacher and YA librarian, Kimberly adores Etsy, Jon Stewart, The Afghan Whigs, ’90s nostalgia, and (of course) everything YA. She also speaks Spanish, but is woefully out of practice.Kimberly always dreamed of being a published author. Her other dream is to live in Key West, Florida where she can write in a small studio, just like Hemingway.