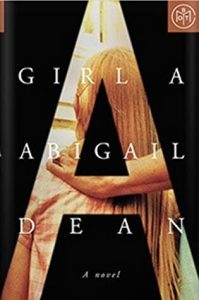 For readers of Room and Sharp Objects, a propulsive and psychologically immersive novel about a young girl who escapes captivity--but not the secrets that shadow the rest of her life.

What begins as a propulsive tale of escape and survival becomes a gripping psychological family story about the shifting alliances and betrayals of sibling relationships--about the secrets our siblings keep, from themselves and each other. Who have each of these siblings become? How do their memories defy or galvanize Lex's own? As Lex pins each sibling down to agree to her family's final act, she discovers how potent the spell of their shared family mythology is, and who among them remains in its thrall and who has truly broken free.

Girl A, if you are one to be interested in the true crime world, is reminiscent of the real-life Turpin family. Childhood neglect and abuse, starvation, and a self-contained, cultlike set of religious beliefs. The story is told primarily from the 1st-person perspective of Lex, otherwise known as Girl A. Other parts of the story are told through a 3rd-person narrative, primarily that of a few of her siblings. There is no question that their story is disturbing and uncomfortable, but it was in no way written gratuitously. It was heartwrenching at times, just trying to imagine the kind of life that each of these children would have been subjected to, even more so when one applies that to the actual Turpin family.

But there were things about the novel that bothered me, maybe in part because I was expecting more of a thriller. And Girl A is not that, not really, despite how it’s touted. However, it was more than that. There were just too many loose ends for me. There are times when the story seems to turn in a particular direction, a few steps are taken that way, and then the story shifts, leaving that direction totally unexplored and unresolved. There are intimations of sexual abuse in some of Lex’s behavior, but then… nothing. There are inferences that the children’s mother was also a victim, but that was never developed or explored. Ethan, her older brother, is often painted in a way that makes him seem less than an innocent victim, potentially culpable in the abuse of his siblings, but… nothing. That was incredibly frustrating because things like that felt vital to the story, but there were never any answers.The lack of a character arc for Lex also bothered me… until I took the time to really think about it. Lex wrestled with her memories and feelings about her upbringing throughout the novel. It was obvious from the first page that she wasn’t entirely healthy, mentally or emotionally. That didn’t change by the end of the book. At first, it felt like there was no growth, no revelation. And that seemed odd, as the book always felt like it was moving toward something incredibly momentous. But upon reflection, I don’t think that’s really true. I think there was character growth. Yes, she’s still a damaged person, but she’s realized things about herself that give her strength and a new outlook. That’s growth.

I wavered between a three and a four star rating for this, but in the end, I gave it a four. While yes, there were things that bothered me, it was still an engrossing read that I would recommend.

Abigail Dean was born in Manchester, and grew up in the Peak District. She graduated from Cambridge with a Double First in English. Formerly a Waterstones bookseller, she spent five years as a lawyer in London, and took summer 2018 off to work on her debut novel, Girl A, ahead of her thirtieth birthday. Abigail is a lawyer and works for Google.