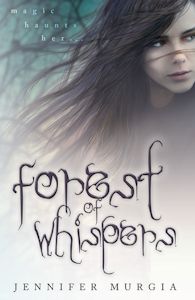 Raised by an old fortune-teller within the dark veil of the Bavarian Black Forest, Rune has learned two valuable lessons: only take from the forest that which you can use, and never, never look anyone in the eye in the village. For something terrible happened in the forest long ago... and now, the whispers of a long-dead mother with a vengeful secret have come haunting.

Forced to flee all she has ever known, Rune soon learns of a legacy she is bound to--one that is drenched in fear, witchcraft and murder--a birthright that stretches beyond the grave to the trees where Rune is no longer safe.

Jennifer Murgia has been writing ever since she was nine years old. After receiving recognition for her poetry, she went on to use her talents to bring characters to life in fiction novels that are authentic, intriguing, and personal. She currently resides in Pennsylvania with her husband and two children.