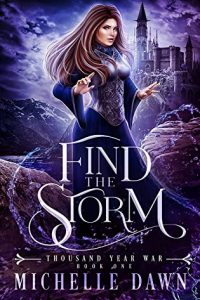 I've been raised to fear my fate. Now I want revenge.
I grew up hidden from the world to keep my magic a secret. Until I ruined everything and exposed us, costing my mother her life.
For generations, war has continued over the Sacred Lands, the source of all magic. While it wages, the women of Bastran are nothing more than breeders forced against their will to create an army of soldiers. My mother was one of them, and I want to find and punish the man who fathered me.
Now, I'm in the rival kingdom of Azurin, and they want to train me to become a powerful soldier, fighting on their side. In the process, I'm faced with a man whose magic inexplicably pulls us together, but can I truly trust him when I've been raised to fear all men?
All I know is, I'm prepared to fight to save myself and other women from becoming breeders, even if it means losing my life in the process.
A dark epic fantasy with reluctant romance. Due to elements of violence, it is recommended for mature readers.

This is the first book in the new Thousand Year War series!

Aria spent her life in relative isolation with her mother, forced to keep her magic hidden. Her mother had forbidden her from using it, telling her it was dangerous with little explanation. But Aria doesn’t understand and frequently uses just a little. But when soldiers come to her village, drawn by the magic. And then everything changes for her, and her life is turned upside down.

The world of the book is well developed and richly described. The characters, for the most part, were also very well developed. I loved Vaile and his family! The dynamics between them were those of love and support, even in the face of obstacles and disagreement. The villains, on the other hand, were so incredibly vile that I literally often cringed. Their scenes were so well done and realistic that it drew me completely in. The villains made it easy to sympathise with Aria and all she endured with them. However, Aria is the one thing that kept me from giving this more stars.

Aria’s entire character was shadowed by distrust and an imbedded near hatred of men. So much that her characterization as the honorable and kind heroine seemed contradictory. I understood that she’d been raised to believe that men where inherently evil and that she’d been abused at the hands of the villains, but it began to feel overdone. It felt almost as if it were a willful choice to refuse to distinguish the difference between good and evil.

But even so, the plot was engaging, and the world was wonderful. And I will definitely read the next book in the series!

Michelle loves to live in a world of imagination. From castles to spaceships, fantasy has always been an escape, and after a lifetime of enjoying others’ works, she decided to create a world of her own.

When she’s not getting lost in a book, Michelle works her nights away caring for others and spends her days enjoying time with her husband and children.

« Dead Sound
Always Have, Always Will »