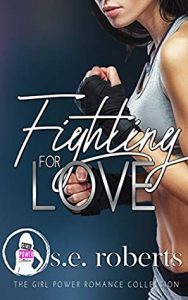 Ripley has dealt with plenty of jerks in the past. So when she meets her new coach, who refuses to work with her, she knows she’ll have a fight on her hands… in more ways than one. Even if he is the sexiest man she’s ever seen, she won’t let anyone treat her less than the fighter she is. But is there more to Ezra Cowen than meets the eye?
Ezra moved to Palm Meadows to escape the ghosts of his past. Now he works all day for his uncle and goes home every night to an empty apartment. But when he meets his new neighbor, he feels a spark between the two of them… at least until he finds out who she is. She’s mouthy and doesn’t take no for an answer, which may be just what he needs.
Can two people who thought they’d never find happiness find it with each other? Despite their rocky start, can they learn that love is worth fighting for? _________________
The “Girl Power Collection” is a celebration of feminism in an unprecedented manner and will serve as an inspiration for millions of readers across the globe. Over the years, men that have made landmark achievements in different facets of life have often been celebrated with very little stories about bad ass women that have excelled in their respective positions. While there are some works that highlight the fantastic achievements of women in powerful positions, there is no particular project exclusively dedicated to celebrating the “girl power.” The compilation contains short stories with the theme of Girl Power in whichever way the author defines it for herself and her readers. The 33 romance stories are narrated in a diverse yet entertaining and inspiring way and will be released in regular intervals throughout 2020.

S.E. Roberts was born and raised in central Illinois but now lives in sunny Arizona with her husband, two kiddos, and cat. She enjoys writing romance books that center around imperfect characters. When she’s not spending time with her family she enjoys reading and chatting with her book loving friends on Facebook.