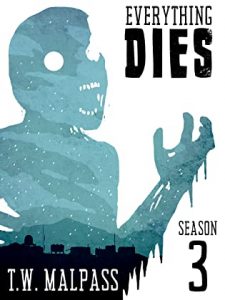 ‘HE IS THE FATHER, WE ARE THE CHILDREN.’
The survivors of the Lazarus Project research facility fire managed to find a new haven deep in the Canadian Arctic, shielded from the dead by the harsh winter.
Almost completely cut off from the outside world, already fractious relationships become ever more volatile as the group desperately searches for food and resources.
Doctor Foster continues her work to find a cure for the Necro Virus in order to save her most important patient, while the others squabble over whether or not the science that caused the outbreak should be crushed into the ground.
Unknown to all of them, a sinister presence they have yet to encounter stalks the barren plains of the tundra, watching and waiting for the right time to strike.
This is the third and penultimate instalment of the Everything Dies series and contains 8 episodes.

Although T.W. Malpass is well-read, he would consider himself more a student of film than of literature. He regularly attends London’s Film 4 Frightfest film festival. Like one of his favourite authors, Clive Barker, he believes that fantasy horror is the neglected offspring of the genre and feels there is a great wealth of originality and talent to be found there.