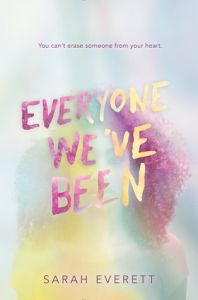 Addison Sullivan has been in an accident. In its aftermath, she has memory lapses and starts talking to a boy that no one else can see. It gets so bad that she’s worried she’s going crazy.

Addie takes drastic measures to fill in the blanks and visits a shadowy medical facility that promises to “help with your memory.” But at the clinic, Addie unwittingly discovers it is not her first visit. And when she presses, she finds out that she had certain memories erased. She had a boy erased.

But why? Who was that boy, and what happened that was too devastating to live with? And even if she gets the answers she’s looking for, will she ever be able to feel like a whole person again?

Everything We’ve Been is the debut novel from author Sarah Everett.  It is one of those books that gives all the feelings, but sorting them out is next to impossible.  Sadness, laughter, anger, disbelief, even horror of the emotional variety.

The story is told in two timelines, one from before Addison’s accident and the other after.  The accident has caused memory lapses and hallucinations involving a boy no one else can see.   Because of that, she takes some aggressive steps to find out who he is and what is missing in her memory.  And that takes her down a path she never imagined.

The twists and turns… I loved them.  Combined with the two timelines, the story was thoroughly engrossing.  At times, it was like reading two different stories.  Pre-accident Addison and post-accident Addison were almost like two separate people.

I loved the story, and the premise behind it.  How far would you go to move forward beyond pain?  Should parents be allowed to make that choice for their child?  Does the loss of memories change who you are, who you become?  How much pain is too much?  Erasing memories… is that always the right choice, or is it sometimes just the easy way out?  These are the kinds of questions that this novel makes a reader consider for themselves.

My only issue with the book is hard to discuss without fear of spoilers.  It has nothing to do with the book itself, but choices that may or may not be made.  But that isn’t a bad thing.  Instead, that is exactly why I enjoy the novel so much.  By disagreeing with a character’s actions, or feeling disappointment at their thought processes, I’ve connected with the character.  On top of that, it makes you consider your own position with the issues at hand.

All in all, this was a thought-provoking read that I loved.  I love any novel that makes me think about my own beliefs and views!

Sarah Everett remembers growing up in enchanted forests, on desert islands and inside a magical wardrobe. She would only ever erase her memory of past karaoke performances and certain fashion choices. She was born in west Africa but currently resides in Alberta, Canada where she attends graduate school and writes YA novels.