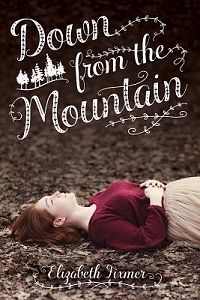 Eva just wants to be a good disciple of Righteous Path. She grew up knowing that she’s among the chosen few to be saved from Armageddon. Lately, though, being saved feels awfully treacherous. Ever since they moved to the compound in Colorado, their food supplies have dwindled even while their leader, Ezekiel, has stockpiled weapons. The only money comes from the jewelry Eva makes and sells down in Boulder—a purpose she’ll serve until she becomes one of Ezekiel’s wives. But a college student named Trevor and the other “heathens” she meets on her trips beyond the compound are far different from what she’s been led to believe. Now Eva doesn’t know which is more dangerous—the outside world, or Brother Ezekiel’s plans . . .

Down from the Mountain was a book that I didn’t expect to enjoy as much as I did.  I tend to avoid books that heavily involve religion, particularly those whose themes revolve around wrongdoings justified by religious beliefs.  But this was an extremely compelling and emotional novel.

The story takes place within a fundamentalist group in Colorado who call themselves the Righteous Path, living in an isolated compound high in the mountains.  With the exception of the leader and a couple of men and boys, the community is almost entirely composed of women.  The adult women become the sister wives of the leader, helping him to create a community of believers.  Most of these women came to him with children and those daughters are also groomed to be his wives as well.  It is a group in which complete obedience is required and their main tenet is that they are the chosen few that will ascend to heaven after the apocalypse.  Those outside the community are eschewed, except when necessary for trade and financial gain.

The protagonist of the novel is Eva, a 15yo girl being groomed to be the next wife to Ezekiel, the self-appointed leader and prophet of God.  She and her mother became a part of the group after her parents divorce.  Because of the complete obedience required by Ezekial, exclusive parent/child relationships are strictly prohibited.  Instead, all children belong to all women.  Despite this, Eva and her mother have maintained a secret relationship, hidden from the community.  It is because of that relationship that Eva’s eyes have been opened and she starts to question the world she lives in.

The conflict of the novel is entirely in the form of Ezekial and his complete control over every aspect of the lives of those in the Righteous Path community.  Whether he is delusional or just domineering is debatable, the end result is complete exploitation of the people within his hands.  Polygamous marriage is forced upon them under the guise of God’s word.  Many of the more recent marriages are to very young girls, girls younger than the legal age of consent.  Brain washing and isolation are a big part of his methodology, as is punishment.  The severity of the punishment ranges from public humiliation to actual physical abuse, depending upon the level of “sin” the person committed.  Other punishments can be the deprivation of food and education, especially the girls who don’t require education in the eyes of Ezekial.

Ezekial is a maniacal, misogynistic, abusive man, a detestable character in every way.  He commits his atrocities in the name of religion and expects his followers to accept them for the same reasons and without question.  Conflict arises when Eva begins to see him for what he is, due in large part to her recent interactions with the outside world.  It is through that that she realizes that perhaps the world isn’t what Ezekial has portrayed, that good exists outside the compound and that perhaps what is inside the compound isn’t as righteous as she has always been taught.  As detestable as Ezekial is, Eva is captivating.  Her change doesn’t come all at once, but over time and with thought and consideration.  She has spent most of her life being groomed, yet she has maintained the ability to think for herself and her character grows through that.

The writing of this book was engrossing and compelling, investing the reader into Eva’s plight, and that of the other women.  There was so much complexity and depth and that complexity carried into the conclusion.  I loved that the ending was realistic, showing the good and the bad, showing the differing feelings within the aftermath of a community such as Righteous Path.

I loved this book, despite the themes of religious abuse.  I felt like the author portrayed a controversial subject realistically, without sugar coating it or glamorizing it.  It was dramatic and thought-provoking and I enjoyed it.

Elizabeth Fixmer probably loves creating and writing stories more than anything else. In her first book, Saint Training, she borrowed parts of her own childhood as well as the historical actions that impacted her emotional and spiritual development. Her second book, Down From The Mountain, reflects her interest and concern regarding religious cults that hurt people. Fixmer worked as a psychotherapist with a few persons who were still in cults, and more who were recovering from negative cult experiences. She is currently working on a book with the working title Mercy. This book is about a seventeen-year-old girl who’s pregnant and serving time in prison.
Fixmer loves many things involving stories: theater, books, movies, television and takes guilty pleasure in enjoying some reality TV, especially those involving other cultures and religions such as Hutterites, Leaving Amish, and Escaping Alaska. Any food show will catch her attention because she loves eating. She also loves animals, especially her pets Charles and Tenacity.

Elizabeth lives in a small town in Southeastern Wisconsin.

« The Catcher in the Rye
The Forgetting »