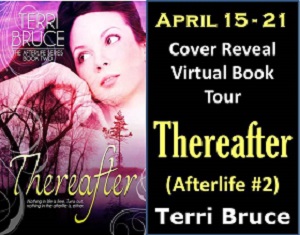 I absolutely love this cover and I can’t wait to read this!  Hereafter, the first book in the series was fantastic and I know that this one will be, too!

Read on for a contest and a giveaway, as well as to learn more about the book and the author!

When recently-deceased Irene Dunphy decided to “follow the light,” she thought she’d end up in heaven or hell and her journey would be over.

Boy, was she wrong.

She soon finds that “the other side” isn’t a final destination but a kind of purgatory where billions of spirits are stuck, with no way to move forward or back. Even worse, deranged phantoms known as “Hungry Ghosts” stalk the dead, intent on destroying them. The only way out is for Irene to forget her life on earth—including the boy who risked everything to help her cross over, which she’s not about to do.

As Irene desperately searches for an alternative, help unexpectedly comes in the unlikeliest of forms: a twelfth-century Spanish knight and a nineteenth-century American cowboy. Even more surprising, one offers a chance for redemption; the other, love. Unfortunately, she won’t be able to have either if she can’t find a way to escape the hellish limbo where they’re all trapped.

“Packed with action, mystery, and romance, Thereafter makes the afterlife anything but dull.” Jennifer Allis Provost, author of Copper Girl

“Thereafter is an intelligently written, thought-provoking read. Irene’s back, and the afterlife will never be the same!” Lori Sjoberg, author of Grave Intentions

“[Thereafter] is at times frightening, funny, and touching…Death was the first problem for Irene, and this new novel makes the next problem even more fascinating.” Sue Burke, translator, Amadis of Gaul

Ian laughed and pointed at something else. Gao leaned closer, and soon the two men were huddled together, pouring over the magazine, Irene clearly forgotten. She watched them for a while, amazed and slightly worried that maybe she shouldn’t have let them see it. Wasn’t there some rule about not telling people from the past about the future? Did that apply to the dead, too, or was it just for time traveler?

The Contest and Giveaway

Author Terri Bruce is celebrating the upcoming release of Thereafter, the second book in the Afterlife Series, with a scavenger hunt/giveaway! One Grand Prize winner will receive a set of 20” x 30” unframed cover art posters (1 each for Hereafter and Thereafter), signed by the author, and an eARC of Thereafter! Five first place winners will receive eARCs of Thereafter. Contest is open internationally. As a special bonus, everyone who enters the contest will receive, via email, a special sneak-peak excerpt of Thereafter, featuring Terri’s favorite scene!

Terri Bruce has been making up adventure stories for as long as she can remember and
won her first writing award when she was twelve. Like Anne Shirley, she prefers to make people cry rather than laugh, but is happy if she can do either. She produces fantasy and adventure stories from a haunted house in New England where she lives with her husband and three cats. Her second novel, Thereafter (Afterlife #2), will be released June 1, 2013.