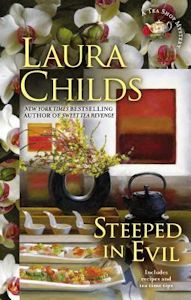 [color-box]Theodosia Browning has never considered herself a wine connoisseur—tea has always been her forte. But that doesn’t mean she’s going to pass up an invitation to a fancy wine-tasting party at the upscale Knighthall Winery, just outside of Charleston, South Carolina.

But a sweet evening takes on a bitter aftertaste when a dead body is discovered in one of the wine barrels. The son of proprietor Jordan Knight has been murdered.

Dissatisfied with the police investigation, Knight turns to Theo for help. She’s heard through the grapevine that there are both family and business problems at Knighthall. They say in vino veritas, but everyone at the winery seems to be lying through their teeth. Sorting through the guest list as well as family and staff, Theo has her pick of suspects. It may look like the killer has her over a barrel, but cracking tough cases is vintage Theodosia Browning.[/color-box]

Steeped in Evil is the latest release from Laura Childs in the long-running Tea Shop Mysteries series, the 15th book in the series since the first one was published in 2001.  So many long-running series, no matter the genre, tend to run their course well before the 15th book, but I find these books to still be as much fun to read as the very first one!

One of the things that I enjoy the most is the varied cast of characters.  Theo, our female lead, is quirky and intelligent and very independent.  She owns a tea shop in Charleston, a tea shop that I truly wish existed and existed near me!  She runs it with the help of Drayton, an older man with a love of tea and of antiques.  Haley works with her, younger than the others, and a whiz in the kitchen.  Mrs. Dimple is an older woman who helps out occasionally and reminds me of Agatha Christie’s Miss Marple in appearance.  There is an entire range of supporting characters, too, all with their own stories and quirky idiosyncrasies that add a lot of depth to the plot.

Aside from the villians in the novel, the only character I really couldn’t get behind was Theo’s boyfriend.  I felt like he was demanding and condescending.  He often seemed to try to control Theo and it rubbed me the wrong way almost every time he was involved.  Fortunately, he was a rather minor character.

The tea shop has been the clear focus of all of the books in this series and that continues to be in this latest installment.  Fans of Downton Abbey will enjoy a scene in which themed tea is held within the shop, complete with special teas and treats.  The author creates scenes like this that are rich in both details and descriptions, and they will often leave the reader salivating!  You can’t help but learn a bit about tea with these books and, as a tea lover, I enjoy that.  Although much of this book, takes place in a local winery, the beloved tea shop still remains the foundation of the series.

The mystery in this story was a good one, the murder of son of the winery’s owner.  There were lots of twists and turns and I never was quite sure “whodunit.”  There were hints and clues that lead to first one suspect and then another, keeping me guessing.  Just when it seems as if everything is solved and settled, there are still some intriguing twists and turns that change everything.

Cozy mysteries are my guilty pleasure, especially those with some kind of theme to them… crafty things or food.  This series has been one I have read from the very beginning because of my love of tea.  Sometimes, however, the amateur sleuth in this genre can come off as bumbling rather than intelligent.  Fortunately, that is definitely not the case in this book.  Theo is smart and capable and fiercely independent.  The other problem that sometimes occurs in this genre is the focus.  Instead of the mystery at hand being the thrust of the plot, it almost gets forgotten with the majority of attention paid to the theme of the book.  This is what kept me from giving a full 5 mugs to this book.  As much as I love the tea shop theme, there was a little less balance in this book.  It often felt like a little too much time was spent on the shop and its details than the mystery itself.  It is a little thing,  though, and not something that kept me from enjoying the book.

One fun part of the book comes  after the story has ended.  There is an entire section of recipes for the foods featured throughout the book.  I tried several of them and loved them all, although my favorite has to be Drayton’s Coconut Iced Tea.  There is also a section on “Tea Time Tips,” all sorts of inspiration for creating your own tea time.  There is even one for a doggy tea time!  The author also includes a “Tea Resources” section full of publications, plantations, websites and blogs, and much more.

Fans of cozy mysteries will enjoy this series.  While I don’t think it is strictly necessary to read the previous books in order to enjoy this one, I do think that it would greatly enhance the story.

Laura Childs is a pseudonym for Gerry Schmitt and she is the best-selling author of the Tea Shop Mysteries, the Scrapbook Mysteries, and the Cackleberry Club Mysteries.

Laura Childs is the New York Times bestselling author of the Tea Shop Mysteries, Scrapbook Mysteries, and Cackleberry Club Mysteries. In her previous life she was CEO/Creative Director of her own marketing firm and authored several screenplays. She is married to a professor of Chinese art history, loves to travel, rides horses, enjoys fund raising for various non-profits, and has two Chinese Shar-Pei dogs.

Laura specializes in cozy mysteries that have the pace of a thriller (a thrillzy!)