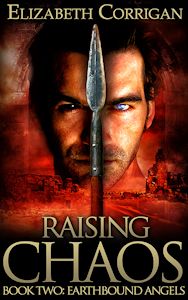 I really loved the first book in this series, Oracle of  Philadelphia, and I think I loved this one even more!  For once, I was grateful for my inability to sleep at night because it gave me that much more time to read.  I couldn’t put it down and was sad when it was over!

The first book centered around both Bedlam and Carrie, who was known to humans as Caela in this story.  For much of this book, they weren’t together, each on their own personal quests.  We got to see a lot more of Caela’s personal side, those human parts of her that are hard to reconcile in a normal way.  Having personal relationships with normal humans is not always the easiest thing to accomplish when one is immortal and has a chaos demon for a best friend.  I think the events of the first book have made her reevaluate her life and she has realized that she needs more than a demon in her life.

We also meet Siren, who I really loved despite her rather cantankerous nature.  She is the Angel of Truth, incapable of telling a lie.  She is also an angelic lie detector.  Tact is not something that she subscribes to, and the image of her mouthing off to her angel superiors is rather hilarious.

But the real star of the book is Bedlam, the unexpectedly adorable and lovable demon who chooses good over evil.  His expletives are hilarious, more than once causing me to giggle out loud.  He is on a quest to save his best friend after Azrael declare her intent to kill her.  The mythology is centered around the Spear of Destiny, a weapon made strong by the blood of God and the only thing that can kill Caela.  We see a side of Bedlam that we haven’t before.  He isn’t just the fun-loving demon out for a good time.  He is intense and we learn so much about him.  But no worries!  He is still Bedlam, quips and humor and all!

There are multiple plot lines in this book, each one of which strong enough to be a story of its own.  Woven together as they are creates a truly engaging read with lots of twists and turns and suspense.  I can’t wait for the next book!

I swiped the piece of paper out from under her pen and beheld what appeared to be a shopping list written in cuneiform. “What in Mephistopheles’s tomb is this?”  (Loc. 145-146).

But for someone who got along with everyone, Gabriel could be extremely clueless about other people’s emotions. More oblivious than me, and I had once given Khet a dead puppy. Long story short, no inside joke can survive the giving of a long-deceased canine, and I probably should have known that beforehand.  (Loc. 160-163).

Oracle of Philadelphia is definitely needed to grasp the entirety of this book so I recommend that first.  But definitely read, read, READ this! 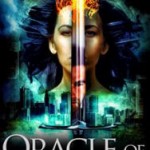 One response to “Raising Chaos”