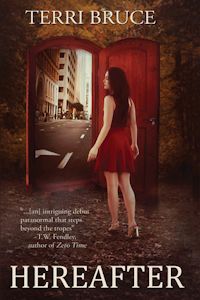 Thirty-six-year-old Irene Dunphy didn't plan on dying any time soon, but that’s exactly what happens when she makes the mistake of getting behind the wheel after a night bar-hopping with friends. She finds herself stranded on earth as a ghost, where the food has no taste, the alcohol doesn’t get you drunk, and the sex...well, let’s just say “don’t bother.” To make matters worse, the only person who can see her—courtesy of a book he found in his school library—is a fourteen-year-old boy genius obsessed with the afterlife.

Unfortunately, what waits in the Great Beyond isn’t much better. Stuck between the boring life of a ghost in this world and the terrifying prospect of three-headed hell hounds, final judgment, and eternal torment in the next, Irene sets out to find a third option—preferably one that involves not being dead anymore. Can she wipe the slate clean and get a second chance before it’s too late?

This was a fantastic read, and nothing like I expected.  At the beginning of the book, I really, and intensely disliked Irene.  She was irresponsible, immature, and more than a little on the selfish side.  I wondered how I was ever going to be able to like her, clearly the focus of the story.  But as the story went on, and we get to know more about Irene, I truly began to feel for her and love her, even with her faults.  Almost everything you read these days has a major romance plot line, but this one really didn’t.  There were individual moments, but romance was not at the center of the story.  Instead, the major relationship in the story was that of Jonah and Irene.  And it was truly one of the most touching relationships I’ve read in long time.  Really interesting way to take the story.  One of the other things I wondered about had to do with Irene’s death itself, but I can’t expand on that without blowing a major theme to the story!

One response to “Hereafter”