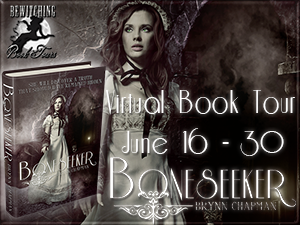 Welcome to the Boneseeker Book Tour!

Today I am happy to host a stop on the Boneseeker tour, as well as a guest blog by the author, Brynn Chapman!  So please read on to learn more about the book and the author, read a fabulous guest post, and to enter the GIVEAWAY!

You can read my review of Boneseeker here!

You can visit other stops on the tour; the schedule is here.

So thanks for hosting me…can I say it is my utmost wish is to someday add to your “Team” Meme’s, a Team Henry. lol.

Often mundane life makes it difficult for writers to cross over the bridge in their head to that magical place that is story.

Every writer I know creates a touchstone, as it were—a conduit that automatically takes them out of their reality to the mind-frame of story, so vital to put the words to page.

One that works for me is images. Images of the time period—or of representations of scenes or characters. Keep those images before you, paired with a play list and Viola, instant setting.

Here are some of my boards. I typically make one for each book.

For Henry and Bella, we needed the fashions of the early 1900’s (think Downton Abby) (I mean, you should think of this show everyday anyway, correct?) so I tried to collect some for both sexes. And of course I am always collecting medical oddities and antiquities for Bella and Henry to add to their curation at their museum.

I look forward to introducing Henry and Bella’s stories to the world.

Arabella Holmes was born different and raised different. After it became apparent she wouldn’t fit the role of a proper 1900’s lady, her father, Sherlock, called in some lingering favors, and landed her a position at the Mutter Museum. The museum was Arabella’s dream; she was to become a purveyor of abnormal science. What her father called a BoneSeeker.

Henry Watson arrives at the Mutter Museum with a double assignment–to become a finder of abnormal antiquities and to watch over and keep Arabella Holmes. An easy task, if he could only get her to speak to him instead of throwing knives in his general direction.

But this is no time for child’s play. The two teens are assigned to a most secret exploration, when the hand of a Nephilim is unearthed in upstate New York. Soon, Arabella and Henry are caught in a fight for their lives as scientific debate swirls around them. Are the bones from a Neanderthal … or are they living proof of fallen angels, who supposedly mated with humans according to ancient scrolls?

Born and raised in western Pennsylvania, Brynn Chapman is the daughter of two teachers. Her writing reflects her passions: science, history and love—not necessarily in that order. In real life, the geek gene runs strong in her family, as does the Asperger’s syndrome.

Her writing reflects her experience as a pediatric therapist and her interactions with society’s downtrodden. In fiction, she’s a strong believer in underdogs and happily-ever-afters. She also writes non-fiction and lectures on the subjects of autism and sensory integration and is a medical contributor to online journal The Age of Autism.