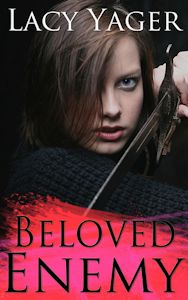 She's the unlikeliest vampire hunter ever. A scientist.

Seventeen-year-old science prodigy Genevieve Quinn never thought she would be kidnapped from her college campus by a vampire. Or that said vampire would want her help on a science project. Genevieve has no intention of complying, but when an escape attempt turns deadly, it is a vampire that comes to her rescue.

Vampire Chad Matthews is an atypical specimen. He’s good-looking, in a dangerous kind of way. But that’s not what attracts Genevieve… it’s the shadows behind his eyes. As Genevieve and Chad team up to find a way to defeat a monster even worse than killer vampires, she discovers that not everything can be explained by science—like falling in love.

As in the other books, we meet some new characters this time and get to know others a lot better.  This book focuses on Genevieve, a brilliant and slightly nerdy MIT student, and Chad, a somewhat broken vampire.  Genevieve really blossoms in this story, but even her growth doesn’t make her lose the most endearing part of her… her social awkwardness that makes her so cute.  I like that Chad wasn’t created to be vampire perfection.  Instead, he had doubts and he was, at least in his own eyes, broken.  It was a great twist to the standard YA romantic hero.

Fans of  Maggie and Shane are going to be disappointed because there is little of them in this book.  But the story is growing and it is obvious that they will be back.  I like this way of building the story, getting different perspectives in different books by focusing on different characters.  There is a lot of action and a whole lot of mystery and intrigue building and building.  I can’t wait to see where it goes next!

My chest is so tight, it hurts.  I pant, trying to keep quiet when I want to gasp.  I wish I had a paper bag, but my captors have taken everything from me- most importantly, my freedom (Loc. 37).

And holding her against me as we hung off the side of that train… I felt something (Loc. 751).

It’s a ton of pressure on her, putting the lives of so many humans, and our group in particular, on Genevieve.  But she hasn’t complained once.  She’s a fighter, she just fights with a unique set of tools, the best of  which is her exquisite mind (Loc. 1793).

This is a great series.  Vamps and mystery and romance… what more could you want?!  Next up is Delicate Accord, due out in the summer of 2014.  This will be Lily and Caleb’s story.

« Shadow Allegiance
We Are the Goldens »