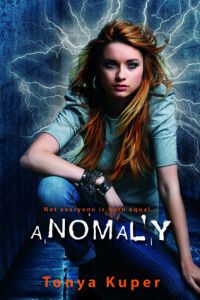 [color-box]Reality is only an illusion.

Except for those who can control it…

My first boyfriend dumped me – happy birthday, Josie!- my dad is who knows where, I have some weird virus that makes me want to hurl, and now my ex is licking another girl’s tonsils. Oh, and I’m officially the same age as my brother was when he died. Yeah, today is about as fun-filled as the swamps of Dagobah. But then weird things start happening…
Like I make something materialize just by thinking about it.
When hot badass Reid Wentworth shows up on a motorcycle, everything changes. Like, everything. Who I am. My family. What really happened to my brother. Existence. I am Oculi, and I have the ability to change reality with my thoughts. Now Reid, in all his hotness, is charged with guiding and protecting me as I begin learning how to bend reality. And he’s the only thing standing between me and the secret organization that wants me dead…[/color-box]

Anomaly is the debut novel of author Tonya Kuper and the first in a new series, Schrodinger’s Consortium.  Unless you are crazy knowledge about various deep principles of science, that series title probably won’t mean much… until you read the story!  I love science fiction that just seems like it just might be possible!

Josie is our female lead and it is hard not to love her!  She is crazy smart, so intelligent that she is a bit socially awkward with her peers.  The story opens with Josie having a really bad day, despite the fact that it is her birthday.  It starts with her boyfriend, who dumps her because she doesn’t put out.  To top it off, her mother is a control freak and her father is potentially missing, as no one has heard from him in over a month.  Then some weird virus hits her, coming out of nowhere, most notably when she sees a super hot guy at her school.  The day doesn’t get any better when she discovers that everything about her life and her famiy is a lie and she is marked for death.  Awesome!  Enter Reid, a guy who is too good looking to be real.  He’s mysterious, has tats, and rides a motorcycle.  And he seems to be into Josie, which she has a hard time wrapping her head around.

I love the mythology that the author created for the world of this book.  Science fiction, fantasy, and a whole lot of intrigue.  There are so many twists and turns and there were times when the story just went in completely different directions from where I thought it was going.  There were a number of, for lack of a better way to put it, “WTH” moments!  Things that came out of nowhere and just slapped me in the face!!  It kept me on the edge of the seat and reading!

If you love great science fiction, good romance, and a smart heroine that doesn’t take herself too seriously, then this is the read for you!

Tonya Kuper’s debut, ANOMALY, the first in the Schrodinger’s Consortium young adult scifi trilogy, releases November 25, 2014 by Entangled Teen. She lives in Omaha, NE with her two rad boys and husband, is a music junkie, and a chocolate addict. Star Wars & Sherlock fan.