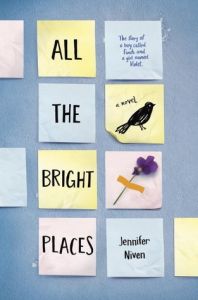 [color-box]Theodore Finch is fascinated by death, and he constantly thinks of ways he might kill himself. But each time, something good, no matter how small, stops him.

Violet Markey lives for the future, counting the days until graduation, when she can escape her Indiana town and her aching grief in the wake of her sister's recent death.

When Finch and Violet meet on the ledge of the bell tower at school, it’s unclear who saves whom. And when they pair up on a project to discover the “natural wonders” of their state, both Finch and Violet make more important discoveries: It’s only with Violet that Finch can be himself—a weird, funny, live-out-loud guy who’s not such a freak after all. And it’s only with Finch that Violet can forget to count away the days and start living them. But as Violet’s world grows, Finch’s begins to shrink.[/color-box]

This book was… amazing.  For heart wrenching novels, this is right up there with The Fault in Our Stars and Love and Other Unknown Variable, two of my favorite novels of 2014.  It touches the soul, it touches the heart, and leaves you reeling.  I started it in the morning and didn’t put it down again until I had finished it.  And then I sat there drained.  It was so beautiful in its own way.  I love that this book recognizes that happy ever afters don’t always happen in life.  Life is messy, sad, funny, loving, and every emotion in between.  There is love and there is loss.

Theo is the guy that no one really understands, including himself.  Even his two best friends seem to know him only on the most basic of levels.  His family is largely a group of people living separate lives and I frequently thought that his little sister Decca was the most together of them all.  He has had a pretty troubled past and he struggles to figure out who he is.  Violet is the, on the surface, the popular girl with the “right” friends and the “right” boyfriend.  Inside, she is a mess, struggling to survive after losing her sister, her best friend.  She doesn’t know how to move on, bogged down in her grief.  The two meet in the worst possible moment, two people who are seemingly totally different.  Yet they are drawn to each other and their story is beautiful.

There is so much depth to this story.  Yes, there are heart wrenchingly sad moments, but there are beautiful ones, too.  There is a ton of unexpected and witty humor, and so much sweetness from Theo that made him even more amazing.  But there is no denying that Theo’s story also made me angry, as a parent.  Without giving too much away, it just angered me to see him as he was through much of the book.  If his parents had just opened their eyes and taken the time to BE parents, his story could have been so very different.  And that drove me insane.

This is a beautiful read.   The story is not light, but touches on real issues with compassion.  Not every story has a perfectly happy ending, but there is always a lesson to be learned and that is the case with this incredible novel.

By the time I was ten, I had already written numerous songs, a poem for Parker Stevenson (“If there were a Miss America for men, You would surely win”), two autobiographies (All About Me and My Life in Indiana: I Will Never Be Happy Again), a Christmas story, several picture books (which I illustrated myself) featuring the Doodle Bugs from Outer Space, a play about Laura Ingalls Wilder’s sister entitled Blindness Strikes Mary, a series of prison mysteries, a collection of short stories featuring me as the main character (an internationally famous rock star detective), and a partially finished novel about Vietnam. I was also an excellent speller from a very early age.

In 2000, I started writing full-time, and I haven’t stopped… I’ve written eight books (two of those are forthcoming), and when I’m not working on the ninth, I’m contributing to my web magazine, Germ (www.germmagazine.com), thinking up new books, and dabbling in TV. I am always writing.

« City of Fallen Angels
The Sun, the Moon and Maybe the Trains »