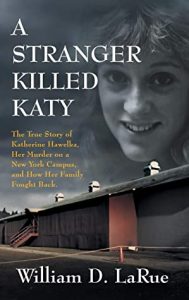 KATY DIED THREE DAYS AFTER THE BRUTAL ATTACK.
JUSTICE ARRIVED THREE DECADES LATER.
In the early morning hours of August 29, 1986, Clarkson University sophomore Katy Hawelka - bright, pretty and full of life - strolled back to her upstate New York campus after a night out. On the dimly lit path beside the university's ice hockey arena, a stranger emerged from the darkness. The brutal sexual assault and strangulation that followed rocked the campus and the local community to its core.
When Katy was declared brain-dead three days later, her family's nightmare had only just begun.
Terry Connelly soon learned details about her daughter's death that would make her blood boil. From the bungling campus guards who could have stopped the murder, to mistakes by others that allowed the killer to wander the streets committing violence, Katy's mother became certain of one thing: The criminal justice system only meant justice for the criminals.
A STRANGER KILLED KATY is the true story of a life cut tragically short, and of the fight by a grieving mother and others more than 30 years later to ensure that a killer would spend the rest of his life behind bars.

Reading this book was a surreal experience. I grew up in Potsdam, and I was just barely 16 the night this happened. It was the first time I think I realized that my small town wasn’t the safe haven I’d thought it was. It was also an odd experience because I knew so many people involved in the case, from some of the townspeople to the cops to the rescue squad guys to the lawyers judges. My dad, grandfather, and great-grandfather were lawyers, my father even mentioned in this book, so I grew up knowing these people. To me, they were just the friends and colleagues of my dad, so it was bizarre seeing them in this way, in an official capacity.

This book was incredibly well researched. And one of the things I appreciated the most about it was the fact that it was so centered on Katy Hawelka, the victim. I read a a lot of true crime (coming from a long line of attorneys, I come by that naturally), and so many times, the books are hyper focused on the criminal. And while that’s interesting, it sometimes feels as if the victim can get lost. Mr. LaRue was obviously cognizant of that, and the effort to make Katy the center was obvious. This is especially interesting as the author knew the offender, their families friends.

Also interesting is that the author covered every parole hearing McCarthy has had since becoming eligible, up to 2019 which was the most recent one prior to the release of this book. Katy’s family has continued to fight for his continuing incarceration, and I’m happy that his most recent parole hearing in June of this year resulted in a denial of parole yet again, as the offender continues to refuse to accept full responsibility or to fully acknowlege the truth of what happened.

William D. LaRue is an award-winning journalist and former reporter and television critic for The Post-Standard in Syracuse, New York. He recently retired as an online producer for newspaper websites owned by Advance Local. A native of Potsdam, New York, he received a bachelor’s degree in English from State University College at Potsdam and a master’s degree in communications from Syracuse University. His published books include the 2021 true crime story, “A Stranger Killed Katy: The True Story of Katherine Hawelka, Her Murder on a New York Campus, and How Her Family Fought Back,” the 2015 biography, “CANDY: True Tales of a 1st Cavalry Soldier in the Korean War and Occupied Japan,” co-written with his father, Kenneth J. LaRue; and the 2018 biography “Captain Puckett: Sea Stories of a Former Panama Canal Pilot,” co-written with Kenneth P. Puckett. William, a father of two, lives in a suburb of Syracuse with his wife, Kathleen.

« In a Holidaze
Winds of Fury »