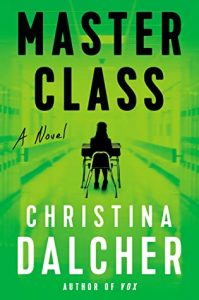 Every child's potential is regularly determined by a standardized measurement: their quotient (Q). Score high enough, and attend a top tier school with a golden future. Score too low, and it's off to a federal boarding school with limited prospects afterwards. The purpose? An improved society where education costs drop, teachers focus on the more promising students, and parents are happy.
Elena Fairchild is a teacher at one of the state's elite schools. When her nine-year-old daughter bombs a monthly test and her Q score drops to a disastrously low level, she is immediately forced to leave her top school for a federal institution hundreds of miles away. As a teacher, Elena thought she understood the tiered educational system, but as a mother whose child is now gone, Elena's perspective is changed forever. She just wants her daughter back.
And she will do the unthinkable to make it happen.

From the moment I began reading Christina Dalcher’s first book, Vox, I’ve been a fan. Master Class just solidified that. This book was dark, with implications that are absolutely chilling to consider.

The world of the book is easily imaginable as our own, which adds to the feeling of horror. It is a perfect example of how an idea that can sound positive in the beginning can then morph and become corrupted until it has become something else entirely. It is terrifying because it shows just how easily something like that could and does happen in our own reality.

In Master Class, the US has created a system much like the social credit system that China is developing in the real world right now. It started out as a system based on education, with tiered schools based on ability and performance. Teachers, too, are tested monthly. At first, that is the limit of the “Q” number. Education.

But then that number becomes the center of everything. The wrong people come together to corrupt its significance in ways that are virtually unimaginable. And that is when the story becomes truly horrific. The capacity for humanity’s ability to be evil is astonishing.

It is a story about family, about what it means to be a family. It’s about love. It’s about freedom, the freedom to be yourself, and about equality. It’s a story about empowerment, about having the courage to stand up and speak against the atrocities of life.

But most of all, this is a novel is a cautionary tale. A reminder of how easily one can begin with good intentions and then fall down the rabbit hole to something much worse. It is utterly brilliant as much as it is terrifying.

This is an important read, a life-changing read. It is chilling, thought-provoking, and brilliant. I HIGHLY recommend this book, as well as her first book, Vox.

Christina Dalcher earned her doctorate in theoretical linguistics from Georgetown University. She specialized in the phonetics of sound change in Italian and British dialects and taught at universities in the United States, England, and the United Arab Emirates.
Her short stories and flash fiction appear in over one hundred journals worldwide. Recognitions include first prize in the Bath Flash Fiction Award as well as nominations for The Pushcart Prize, Best of the Net, and Best Small Fictions.
Laura Bradford of Bradford Literary Agency represents Dalcher’s novels.
After spending several years abroad, most recently in Sri Lanka, Dalcher and her husband now split their time between the American South and Andalucia, Spain.