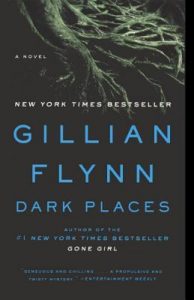 Libby Day was seven when her mother and two sisters were murdered in "The Satan Sacrifice" of Kinnakee, Kansas." She survived--and famously testified that her fifteen-year-old brother, Ben, was the killer. Twenty-five years later, the Kill Club--a secret secret society obsessed with notorious crimes--locates Libby and pumps her for details. They hope to discover proof that may free Ben. Libby hopes to turn a profit off her tragic history: She'll reconnect with the players from that night and report her findings to the club--for a fee. As Libby's search takes her from shabby Missouri strip clubs to abandoned Oklahoma tourist towns, the unimaginable truth emerges, and Libby finds herself right back where she started--on the run from a killer.

The title of this book is a perfect representation of what’s between the pages. It is twisted, horrifying, raw, and it shines a light into all those dark corners we all want to pretend don’t exist. Oh, but they do.

The story is told in two timelines, the present day and 1985, when Ben Day murdered his mother and two sisters, leaving Libby the sole survivor besides Ben himself. Not surprisingly, Libby’s life has been anything but idyllic.

Libby’s character is interesting, although I know a lot of readers may not connect with her. She’s imperfect, with qualities that, on the surface, may be unlikable. Does she do things that would be easy to condemn? Absolutely, but there’s still something about her that makes you care, makes you understand why she is the way she is. Even before the murder of her family, Libby’s life was difficult. The added trauma at such a young change has irrevocably changed her. To me, that makes her sympathetic. This is a girl who’s grown into womanhood alone, with little to no real support. She’s lost, alone, completely unprepared for life. It made me feel for her, to want more for her, even if she is a bit on the emotionally deranged side.

Throughout the book, I had all kinds of theories as to where the story was leading. But I was wrong every single time. The book is deliciously demented in so many ways. There are times when the story edges toward unbelievable, yet even in those moments, it’s entirely imaginable. Sometimes, there was an almost palpable level of discomfort with the dark, disturbing moments, but yet it’s impossible to turn away from it!

Gillian Flynn is an American author and television critic for Entertainment Weekly. She has so far written three novels, Sharp Objects, for which she won the 2007 Ian Fleming Steel Dagger for the best thriller; Dark Places; and her best-selling third novel Gone Girl.

Her book has received wide praise, including from authors such as Stephen King. The dark plot revolves around a serial killer in a Missouri town, and the reporter who has returned from Chicago to cover the event. Themes include dysfunctional families,violence and self-harm.

Flynn, who lives in Chicago, grew up in Kansas City, Missouri. She graduated at the University of Kansas, and qualified for a Master’s degree from Northwestern University.

« The Collective
Behind Her Eyes »