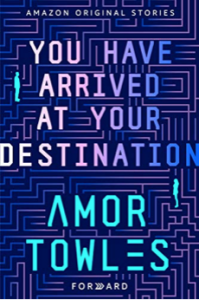 Nature or nurture? Neither. Discover a bold new way to raise a child in this unsettling story of the near future by the New York Times bestselling author of A Gentleman in Moscow.
When Sam’s wife first tells him about Vitek, a twenty-first-century fertility lab, he sees it as the natural next step in trying to help their future child get a “leg up” in a competitive world. But the more Sam considers the lives that his child could lead, the more he begins to question his own relationships and the choices he has made in his life.
Amor Towles’s You Have Arrived at Your Destination is part of Forward, a collection of six stories of the near and far future from out-of-this-world authors. Each piece can be read or listened to in a single thought-provoking sitting.

Born and raised in the Boston area, Amor Towles graduated from Yale College and received an MA in English from Stanford University. Having worked as an investment professional in Manhattan for over twenty years, he now devotes himself fulltime to writing. His first novel, Rules of Civility, published in 2011, was a New York Times bestseller in both hardcover and paperback and was ranked by the Wall Street Journal as one of the best books of 2011. The book was optioned by Lionsgate to be made into a feature film and its French translation received the 2012 Prix Fitzgerald. His second novel, A Gentleman in Moscow, published in 2016, was also a New York Times bestseller and was ranked as one of the best books of 2016 by the Chicago Tribune, the Miami Herald, the Philadelphia Inquirer, the St. Louis Dispatch, and NPR. Both novels have been translated into over fifteen languages.

« Outback Treasure 1
Order of the Wicked »