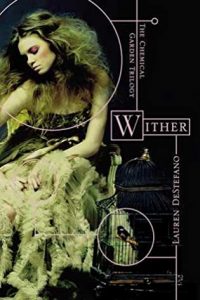 What if you knew exactly when you’d die? The first book of The Chemical Garden Trilogy.
By age sixteen, Rhine Ellery has four years left to live. A botched effort to create a perfect race has left all males born with a lifespan of 25 years, and females a lifespan of 20 years—leaving the world in a state of panic. Geneticists seek a miracle antidote to restore the human race, desperate orphans crowd the population, crime and poverty have skyrocketed, and young girls are being kidnapped and sold as polygamous brides to bear more children.

When Rhine is sold as a bride, she vows to do all she can to escape. Yet her husband, Linden, is hopelessly in love with her, and Rhine can’t bring herself to hate him as much as she’d like to. He opens her to a magical world of wealth and illusion she never thought existed, and it almost makes it possible to ignore the clock ticking away her short life. But Rhine quickly learns that not everything in her new husband’s strange world is what it seems. Her father-in-law, an eccentric doctor bent on finding the antidote, is hoarding corpses in the basement; her fellow sister wives are to be trusted one day and feared the next; and Rhine has no way to communicate to her twin brother that she is safe and alive.

Together with one of Linden's servants, Gabriel, Rhine attempts to escape just before her seventeenth birthday. But in a world that continues to spiral into anarchy, is there any hope for freedom?

Wither is set in the future, in a world that somehow seems both futuristic and primitive at the same time.  War has literally changed the world as we, the reader, know it.  Modern science and technology have changed humanity, illusions and holograms having replaced reality and the humanity of relationships.  The desperation that society feels is evident in the way it has changed and the lines between what is right and what is wrong have been thoroughly blurred.  Although an set in an alternate reality, there was a very clear parallel between that world and our own.  The alternate reality was fully believable as a real possibility for our future which made the entire story that much more intriguing.

I thought the writing of this debut novel from a young author was exquisite.  I was immediately drawn into the story and into the lives of the characters.  The author excels at drawing out emotion from the reader and blends the surreal and reality seamlessly.  The very first paragraph set the tone for the rest of the novel:

“I wait.  They keep us in the dark for so long that we lose sense of our eyelids.  We sleep huddled together like rats, staring out, and dream of our bodies swaying.”

I love characters that I can fall in love with, root for, feel for, become involved with.  The characters in Wither didn’t disappoint.  I liked the fact that no one character was pure, whether purely good or purely bad.  The fact that the good and the bad, the selflessness and the selfishness, was a part of each character further demonstrated the theme that humanity had changed people.  In different circumstances, maybe these people would have been different, but the reality of their world as they knew it changed how they thought, how they behaved.  This made the characters far more relatable in the setting of the story.

The ending of the novel didn’t answer all the questions or tie up all the loose ends, but it wasn’t supposed to.  It gave enough to satisy, but left the way clear for the next book.  I truly did not want the book to end and it saddens me that this, the first of three, isn’t due out until the end of March.  Why?  Because that means it is going to be even longer until the next one comes out!

I know that you aren’t supposed to judge a book by its cover and I really don’t, but sometimes a cover is so striking that it really hits me.  Not only is the cover art of this book stunning, I love the fact that the image of the girl matches a scene within the book.  Too many times, the covers seem to be unrelated to the story inside, but this one was perfect.  I also loved the symbolism of the caged bird, a detail I didn’t truly appreciate until I got farther into the story.

« Holiday with a Vampire III
The Morning Show Murders »