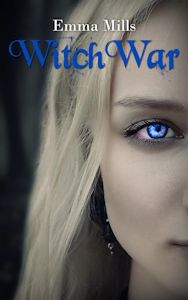 In the final book of the Witchblood series we find Jess and her friends ten years on, about to battle with enemies on all sides, as the supernatural world crashes into the human domain.

With everybody’s lives on the line Jess will need to work out who she can trust before a deadly witch hunt threatens to uncover them all. Death and love will once again consume her life, but only one side can win.

I am an unabashed fan of Emma Mills and I can’t tell you how sad I am to see this series end!  But I also can wait to see what she comes out with next.  The characters in these books have been through so much and the reader feels like they have been right there with them!

In this last book, Jess and her friends are ten years in the future and they once again find themselves in the middle of an epic battle.  But this time, the stakes are even bigger.  This time, the supernatural world is no longer hidden and everyone is in danger, supernatural and human alike.

Ten years into the future finds Jess much more secure in her new life.  She is strong and confident, although still a baby by vampire standards.  She is different from the other vampires in existence and this gives her more power than most of the others.  This makes her valuable to the supernatural world, but it also makes her vulnerable.  I love that she stood more on her own in this book.  She is still with the yummy Daniel, but she has her own life and her own strength now.  I love how much her character has grown.  Now she is the problem solver, the one to go in and really save the day.

There was so much that was unexpected in this book and I really enjoyed that.  The twists and turns kept coming and took the story to places I wouldn’t have imagined!  This book, perhaps more than all of the others, really brings out the feels.  There are happy moments, scary moments, frustrating moments… and everything in between.  Love, love, love!