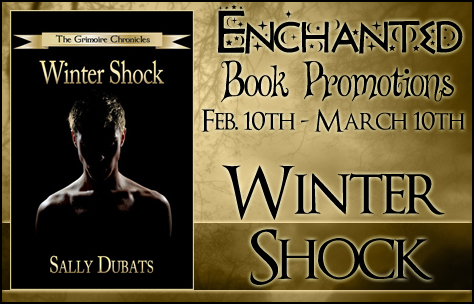 Welcome to my stop on the Winter Shock Blog Tour!

I am happy to be a part of this tour!  I fell in love with the first book, Veil Between Worlds, and this book just deepened that love!  You can read my review of this amazing book here.

Keep scrolling to read a guest post by the author, Sally Dubats, and to learn more about the book and the author!

Hi, Kim! Thank you so much for having me as a guest on your website! I love that you were in the military. I  am a veteran of the US Navy, and I know we’ve talked about that on Facebook and Twitter. I was lucky. There was no war or even really a threat of war when I was in the Navy, and so I have some really good memories of great people. One of the supporting characters in “Winter Shock” has decided to join the Army. He’s a senior in high school, and we don’t know a whole lot about him as a reader (we’re learning a little more with each book), but we’re going to follow his process and his decision-making strategies and how they affect his family and his girlfriend throughout the series.

I wanted to explore this because I decided to go into the Navy in high school, and my parents had to sign for me to go because I was only seventeen! My Dad didn’t want to sign, but I convinced him (and so did the recruiter). Because I was very young, my thought process was along the lines of: the Navy helps to pay for college, I would get to travel and meet new people, and I believed the slogan, “Navy: It’s not just a job. It’s an adventure.” The Navy gave me skills that I’ve used for the rest of my life, and I’m glad I did it, but there are SO many more considerations now. Like, um, War.

When I think how very, very young I was, I think about the realities of war, and that kids who are only seventeen could lose their lives. Many have, and it’s heart-breaking. It was one of the reasons I thought Hunger Games wasn’t so far-fetched. I also know that I felt like a complete adult at that age, and sometimes people criticize Young Adult literature for having characters that are too mature. But people do what they have to do, and that’s why a seventeen-year-old girl like Cassie, the heroine in “The Grimoire Chronicles,” can be extremely mature and it’s believable. For instance, I had just turned eighteen when I rented my own little cottage by the ocean in San Diego. I paid my bills, and I rode my bike to work every day (or got a ride from my neighbor who had a Harley), and eventually got a car. I was also going to college at the same time.

It’s different now. I really admire kids who have joined the military, but I also wish that we could all ascend to a higher place and be a better species and not need war at all! Then everyone who is in the military world-wide could reorient. Everyone in the military could work toward building homes, growing food, feeding the hungry, and helping during natural disasters. Yeah, I know… that’s another fantasy series in the making, but wouldn’t it be nice?

On that note, if you’re reading this and you know someone who is thinking about joining the military, have them write down the realities, and the pros and cons. Whether or not you support their choice, support and honor them in their decision-making process.

Kim, thank you so much for having me. I just adore you!

(On a personal note… I truly appreciate the time it took to write this guest post, especially because of the military connection!  So, thank you, Sally!  It has been an honor getting to know you!  -Kim, The Caffeinated Diva) 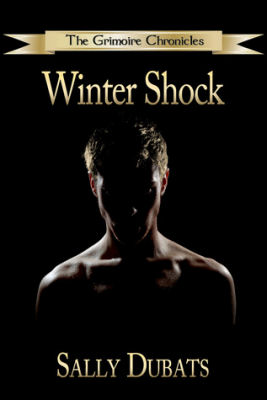 “Trenton drugged and kidnapped me. I was powerless.”

Cassie’s neighbors have secrets, and she is one of them.

A Witch taken against her will to an isolated, frozen wilderness on an impossible quest, Cassie defends herself against Trenton who has gone over to the dark side. One minute he’s adorable and charming, and the next weird, uncaring, and hostile. And now, Cassie fears for her life.

Winter Solstice draws near, and Cassie performs magical spells to gain clarity. Instead she is shocked by visions and mind jumps into the lives of strangers on the brink of disaster.

Why is she in a hostile, threatening wilderness? What is causing the horrific visions? Cassie discovers there is much more at stake than her own survival. To survive, she must overcome impossible odds.

Sally Dubats is a published author of a non-fiction compendium on the practice of witchcraft called Natural Magick: The Essential Witch’s Grimoire. Her current project is an 8-book fantasy series, The Grimoire Chronicles. The first two books are complete, and Veil Between Worlds and Winter Shock have received critical acclaim. She has held editorial positions for green non-profit organizations, and was the editor of a metaphysical newspaper for several years. Sally is Wiccan and continues to practice and research the Craft.

Tour brought to you by Enchanted Book Promotions.