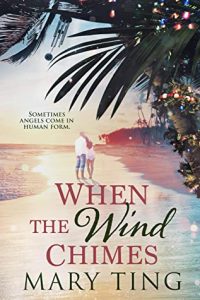 Kaitlyn Summers is heartbroken.
When she receives an invitation to spend Christmas with her family on the Hawaiian island of Kauai, she feels it may be the perfect medicine.
She throws herself into helping her sister’s struggling art gallery, even taking a temporary job for extra money by looking after a little girl from her nephew’s school. She also begins to paint again, something she’s been unable to do since her breakup. It’s tempting to stay on Kauai, but she has obligations back in Los Angeles.
Life gets more complicated when circumstances keep putting her close to Leonardo Medici. Not only is he drop-dead gorgeous, he’s a local celebrity. But Kaitlyn can’t shake the feeling he’s hiding something.
Should she believe the rumors that he’s romancing half the island’s single women?
Or is the random sound of wind chimes when he’s close-by a sign that an angel is near and the secret to her happily ever after?

As soon as I heard about this book, I wanted to read it. For one thing, it is set in Kaua’i, a neighboring island. For another, it’s written by Mary Ting, and I would read the phone book if she wrote it!

When the Wind Chimes is a a beautifully sweet romance. Kaitlyn Summers has come to the island to spend the holidays with her sister and her nephew. What I love most about Kate as a character is that love and romance was the furthest thing from her mind. If anything, it was the last thing she wanted. Similarly, Lee, while not necessarily against the idea of finding love and romance, was rightfully wary of finding the real thing. That created a level of reluctance on both their parts that made the rest of the story that much more interesting.

That is one of the things I love so much about Mary Ting’s books, the character development. As a reader, I want to feel like I know a character, whether main or supporting. She does that for me. I felt Kate’s struggle, understood Lee’s. And Abby, my heart felt for her. Even the children, little ones, I loved them. Tyler and Bridget had their own stories, just like Abby, and I loved them both.

This is more than just Kate and Lee’s story. This is the story of five people, about trying to find their way through all of the things that life hands them. It was beautiful! If you love romance with real people and deep feelings, this is a great read. I promise on “the unicorns

, and all the sparkling things

.” Which is a sentiment you will understand upon reading this wonderful book!

Mary Ting is an international bestselling, award-winning author. She writes soulful, spellbinding stories that excite the imagination and captivate readers around the world. Her books span a wide range of genres, and her storytelling talents have earned a devoted legion of fans, as well as garnered critical praise.

Becoming an author happened by chance. It was a way to grieve the death of her beloved grandmother, and inspired by a dream she had in high school. After realizing she wanted to become a full-time author, Mary retired from teaching after twenty years. She also had the privileged of touring with the Magic Johnson Foundation to promote literacy and her children’s chapter book: No Bullies Allowed.

« Ready For It Release Day
Devil in Disguise »