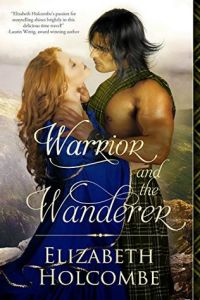 Infamous Scottish bad boy, Ian MacLean, takes a road trip to sort out his mess of a life and lands five hundred years in the past. He is taken hostage into what he is certain is a band of extreme Highland role players. The only bright light in this strange situation is his insanely beautiful warrior-princess captor who wields her claymore as well as her fiery feral charms.

To gain a strong ally for her clan, flame-haired Bess Campbell reluctantly married a powerful Highland chief who had no intentions of uniting the clans. After murdering her clan chief, he chains her to a rock condemning her to die in the rising tide, until a strangely dressed but startlingly handsome man emerges from the waves like a mythical selkie and rescues her. Bess learns her most odd savior has the same name as her murdering husband—MacLean—and makes him her prisoner.

Fearing she may have captured a madman, Bess forces Ian to journey through Scotland chasing down a killer. She finds Ian’s strange ways oddly endearing and uncommonly useful to her quest for revenge. Ian struggles to find a way back to his time, while being pulled deeper into his role in the past and his undeniable attraction for the fiery Highland warrior princess, Bess Campbell.[/color-box]

Warrior and the Wanderer is the first book by Elizabeth Holcombe that I have read and, although it is a genre that I don’t read much of, I enjoyed it more than I had anticipated.  It is historical romance, with a nice bit of time travel, and it made for a really fun read.

Ian MacLean is from the present, on the downside of a once thriving musical career until he basically trashed it.  He is used to getting what he wants, using his voice to do it and now he has having a hard time adjusting to life on the down side.  One day he is driving through the Nevada desert in 2014 and the next he finds himself in a lake in Scotland… in 1512.  It is in this unlikely place that he meets Bess Campbell, tethered to a rock by her not so loving husband and left to die.  He saves her and finds himself this warrior clan chief’s prisoner, all because of the insane complication of sharing a surname with that husband.

The time travel aspect led to some funny moments as Ian struggles to understand his situation, initially believing he was being held by cult-like LARPers.  He just can’t wrap his mind around the fact that he has actually traveled back in time, improbable as that might be.  And those of medieval Scotland can’t understand Ian’s strange clothing and words and mannerisms.  Against all odds, Bess and Ian fell for each other and their romance was fun to read.  Nothing came easy and I like that because it made their romance believable in the midst of an unbelievable scenario.  I liked, too, that in this story, it was the man that was sure of his feelings and the woman who balked.

While an HEA was expected, there were still questions right up until the last pages as to how it would end and I liked that it wasn’t too easy to guess.  If you like a good romance, historical or not, with unexpected moments of humor, this is a good read.  The time travel aspect added a lot to the story and I enjoyed it.

Elizabeth Holcombe’s background includes Bachelors and Masters degrees in Fine Arts and Art History from Virginia Commonwealth University in her hometown of Richmond. She has taught elementary school and adult education courses on architecture in Rochester, Minnesota, and then worked as a fine arts museum registrar at the Flint Institute of Arts in Michigan.

Although she’s been writing since age ten, it wasn’t until after the birth of her son that she began penning book-length fiction. A past president of Washington Romance Writers, Elizabeth has also organized two highly successful seminars on romance for The Smithsonian Associates.

Elizabeth lives in Falls Church, Virginia with her husband and son. She is also the proud owner of Dime Store Chic, ranked in the top 50 for vintage shops on Etsy.com. When not writing or crafting her mixed media creations, Elizabeth frequents local estate sales and flea markets.