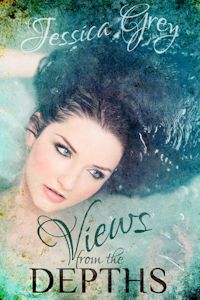 A mermaid willing to trade her life for love...

A young girl whose beauty can drive people mad...

Twelve sisters with a mysterious addiction...

A beast that can only be transformed by love...

Views from the Depths is a collection of four short stories told from perspectives of multiple characters. Each of these stories takes an in-depth and sometimes melancholy look at some of your favorite fairy tales.

Includes adaptations of The Little Mermaid, Snow White and the Seven Dwarfs, The Twelve Dancing Princesses, and Beauty and the Beast.

Views from the Depths is a collection of short stories, retellings of four classic fairy tales.  The stories are explored from much darker, more melancholy perspectives, bringing an entirely new light to stories that most of us are more familiar with in their more sanitized Disney-style formats.  This collection answers questions that most of us never realized needed to be asked,  Each story is told from multiple first-person POVs, which truly expands the story.

The first story is based on the classic The Little Mermaid.  This one was told from the POVs of the Witch herself, as well as the mermaid, her sister, and her land-born rival.  It is a story of choices and how those choices affect others.  It made me look at the story in an entirely different way!

The second story is based on Snow White and the Seven Dwarfs.  The story begins with The Huntsman’s version, and then tells the story from the POVs of the Queen, one of the dwarves, the Prince, and finally, Snow White herself.  This story is about jealously and betrayal, unexpected emotions, and the fight for survival.

The third story is a retelling of The Twelve Dancing Princesses.  This story is told from the POV of the King, the oldest daughter, the captive/champion soldier, and the youngest daughter.  This story is interesting in that it is a bit “behind the scenes” to the classic tale.

The last story is based on The Beauty and the Beast.  It is told from the POV of the Fairy, the Merchant, the Beast, and Beauty.  This is a story of pridefulness, good intentions gone wrong, arrogance, and love.

While there may be a HEA or two, these stories are rather bittersweet and often without that classic HEA.

If you love fairy tale stories, especially those with a darker edge, these are perfect!

Jessica Grey is an author, fairytale believer, baseball lover, and recovering Star Wars fangirl. A life-long Californian, she now lives with her two children in the Rocky Mountains where she spends her time writing, complaining about snow in April, and drinking way too much caffeine.

« The Sword and Its Servant
Mirror X »