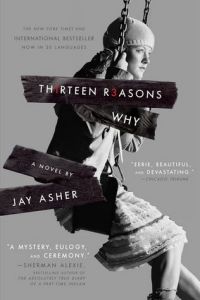 Clay Jensen returns home from school to find a strange package with his name on it lying on his porch. Inside he discovers several cassette tapes recorded by Hannah Baker—his classmate and crush—who committed suicide two weeks earlier. Hannah's voice tells him that there are thirteen reasons why she decided to end her life. Clay is one of them. If he listens, he'll find out why.

Clay spends the night crisscrossing his town with Hannah as his guide. He becomes a firsthand witness to Hannah's pain, and as he follows Hannah’s recorded words throughout his town, what he discovers changes his life forever.

I don’t know what I can say about this book that hasn’t already been said.  I read it after watching the Netflix series, and while there are definitely differences between the two, the combination left me reeling.  It is deeply moving, poignant, and yet one of the most hopeful books I’ve ever read.

The story revolves around Clay, who finds a box of cassette tapes waiting on his doorstep one day.  As he listens to them, he is drawn into the story of Hannah, his crush that committed suicide just a couple weeks earlier.  The tapes share the thirteen reasons why she made the choice that she did, one for each person that contributed to that decision.

On the surface, it sounds like a horrifying premise for a read.  It is a tough read at times, but no less important.  Her point of creating the tapes, to be passed to each person on them, was not to be cruel.  It was to make a point… the point that how we act toward one another, whether deliberate or not, makes a difference.  Any one of those acts can be small in and of itself, but they can add up to push a person over the edge.

Having seen the series and read the book, I have to say something I never thought I would.  As much as I loved the book, I felt that the series really showed Hannah’s angst just a bit more clearly.  Admittedly, some of that was accomplished through changes in the plot and some details.  Ideally, I would suggest indulging in both.

Jay Asher was born in Arcadia, California on September 30, 1975. He grew up in a family that encouraged all of his interests, from playing the guitar to his writing. He attended Cuesta College right after graduating from high school. It was here where he wrote his first two children’s books for a class called Children’s Literature Appreciation. At this point in his life, he had decided he wanted to become an elementary school teacher. He then transferred to California Polytechnic State University in San Luis Obispo where he left his senior year in order to pursue his career as a serious writer. Throughout his life he worked in various establishments, including as a salesman in a shoe store and in libraries and bookstores. Many of his work experiences had an impact on some aspect of his writing.