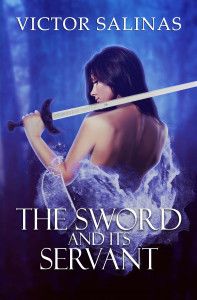 The gods were long ago destroyed. The links between the Nine Worlds of Creation are deteriorating. The Gates to the Underworld are closed. A veil of shadow shrouds all the land. Rumors of a dead savior reemerge.

​Einsa finds herself without memory of her past and her origin, held prisoner by the Löwa, a species of warped monsters bent on using the Children of Mann for their horrendous genetic experiments. She and her companions are merely lab rats waiting to be plucked by their captors—until they decide to make their escape. Einsa’s only hope for survival in the fallen world that awaits her rests with Klinde, an ancient and infamous warrior who is just as cunning and bloodthirsty as the enemy.

The Sword and Its Servant is the first installment of the multi-part Young Adult fantasy saga that takes you on a dark, fast-paced journey through the Grauwelt. It is a world filled with depravity, cruelty, mystery, and more than its fair share of insanity. Experience in vivid detail its strange inhabitants, horrendous creatures, wondrous locales, and deep lore through the eyes of a girl trapped between two evils.

The Sword and Its Servant is the first installment of what is going to be a six-part series, all set in the world of the Grauwelt.  The Grauwelt is a world that is somewhere between our own and that of Hel.  It is full of creatures that are straight out of our nightmares, all fighting for supremacy.

One of my favorite things about high fantasy works is that there often isn’t a clear line between that which is good and that which is evil.  The characters in this novel are very much in the gray between them.  There are many that you want to thoroughly dislike, if for no other reason than that they are beings out of nightmares.  But they are also sentient beings who have moments that remind you of some part of humanity.  Klinde is a Child of Hel is an ancient warrior whose physical form may surprise you.  With the nomenclature of “Hel,” one expects evil, but again there is such a gray area that one never really knows.

There are several parallel story lines that are carried throughout the book.  They never truly intersect, but there are moments of foreshadowing that lend to imaginings of possibilities.  By the end of the book, you have so many questions and very few answers.  I expect that to some extent, as there is more to come with this series, but there were so many left unanswered that I honestly don’t know how I feel about it.

This book is really more than a book, but part of a larger experience.  It is a premise that I haven’t encountered before and it will be interesting to see how it all works together.  There is a huge interactive side to it that the publishing company intends to expand even further.  The main website is here and I would recommend checking out the “About” page, especially “The Present and Future” section.  Already there is a free online RPG called Grauplay, as well as the beginning of a wiki for the world of the Grauwelt.  It is a fascinating idea!

Note:  I have attached the content warning to this post, not because of sex or drugs, but because there is a lot of violence and mightmarish aspects to this novel.  The author does describe this as YA and most of the characters are of that age, but it is definitely an older YA!

This was unlike much of what I read, but I think it is a good start to an interesting new series!

Vic is the principal creator and director behind Grauwelt and the author of the flagship book series. He is a long-time fan of many fantasy and Sci Fi series including the Lord of the Rings, Dune, and Star Wars (his all-time favorite: he dares you to test his knowledge!).

While he’s not busy bringing the world of Grauwelt to life, Vic spends his time reading, exercising, and playing competitive Pokémon (want to battle?). He has spent much of his life working as a translator of English and Spanish. His Mother is from South America which has afforded him many opportunities to travel there and visit family.

He currently lives in the Washington, D.C. area. with his long-time companion and giant collection of nerd memorabilia.

« Light the Lamp Book Tour
Views from the Depths »